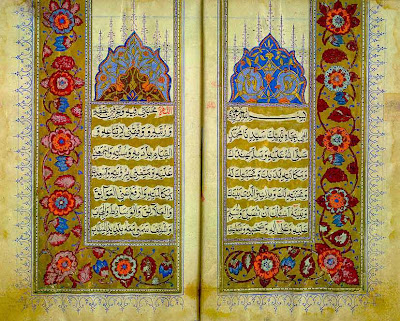 Whilst going through Sh. al-Luknawi’s commentary of al-Sayyid al-Sharif al-Jurjani’s text on the science of hadith I found the following interesting passage regarding the Dalail al-Khairat, and Sh. al-Luknawi’s narration for it from a scholar in Madinah. He mentions this incident in the course of commenting on narrating to a scholar who is busy or preoccupied with another matter, and what the scholars of hadith have mentioned about such a thing.

.
Recitation and Ijazah for the Dalail in Madinah the Illuminated
Sh. al-Luknawi said in ‘Zafar al-Amani’ (p.458-459):
Excluded from this is being busied/preoccupied in a manner which does not prevent concentration, as I witnessed for our Sheikh, the Sheikh of the Dalail, Mawlana Ali bin Yusuf Malak Bashali al-Madani al-Hariri. I visited him in the first ten days of Muharram in the year 1280 in Madinah the Illuminated, along with my late father. He had a shop shop close to Bab al-Salam or Bab al-Rahma from the doors of the Masjid al-Nabawi where he would sell silk.

He whilst listening to it would sell silk and converse with the buyers who were present, as his shop was popular with visitors. Despite this, his being busy/preoccupied did not prevent him, for every time the reader would make a mistake in his recitation he would immediately correct him from his memory.