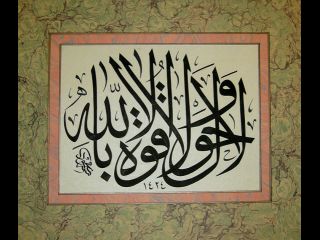 ‘The grass is always greener on the other side’ is an attitude which we can find our selves slowly drifting towards. Sometimes we need to step back and appreciate what we have and give thanks to The One who is the source of these blessings.

I came across the following in the wonderful Tafsir al-Mazhari, may Allah the Exalted allow us to benefit from it.

Benefit: The Mujaddid [K: Shaykh Ahmad al-Sirhindi] chose for the obtainment of benefit and repelling of religious and worldly harms the abundant invocation of لا حول ولا قوة الا باللّه (there is no strength nor power except through Allah). He specified the abundant recitation to be that it is recited daily 500 times, and that he before and after it sends salutations upon the Prophet (Allah bless him and give him peace) 100 times.

The Messenger of Allah (Allah bless him and give him peace) said: ‘Whomever Allah has bestowed a blessing upon and he wishes for it to remain then he should abundantly recite لا حول ولا قوة الا باللّه. It was reported by al-Tabarani from the hadith of Uqbah bin Amir.

And in the two Sahih’s from Abu Mawla in a marfu form that ‘it is a treasure from the treasures of paradise’, and in the al-Nasai’s version it is: ‘Whomever recites لا حول ولا قوة الا باللّه it is a medicine for 99 diseases, the least of them is worry’.