A Note to the Deluded – Introduction 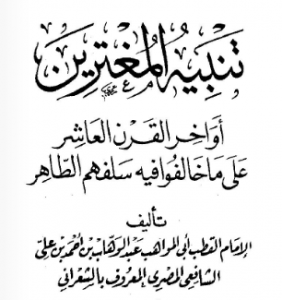 Imam Abd al-Wahab al-Sharani’s work entitled Tanbih al-Mughtarrin (which could be roughly translated as “A note to the deluded”) is a book I have dipped in to many times over the past 15 years. In this book the author highlights the different akhlaq (character traits) of the salaf (pious early Muslims) which the people and scholars of his era had abandoned. I will InshAllah see if I can share some extracts from it in the near future, in the meantime the introduction to the work presented below gives a fascinating insight in to the reason for its being written and the reception it received.  Imam Abd al-Wahab al-Sharani said:

“From the main reasons for my writing this work was what I witnessed from the investigation undertaken by the staff of Mawlana, the Sultan Sulayman bin Uthman in second half of the 10th [Islamic] century looking in to the theft of his wealth by government employees and others, and their reason for [this investigation] was in order to support him.
I noticed that none of the scholars of the sacred law had undertaken an investigation – with the intention of supporting the Messenger of Allah (Allah bless him and give him peace) – in to the prominent akhlaq of the Muhammadan shariah which had become extinct, just as the staff of Mawlana the Sultan (May Allah grant him victory) had done so.
I was overcome by a feeling of protectiveness (ghayrah al-imaniyyah) to the sacred law and thus authored this book as clarification as to what has disappeared from the prominent akhlaq from the world of scholars of the outer and inner (al-zahir wal-batin). It is a work which is beneficial to every jurist and Sufi in this age to the point that perhaps none of them are without need of looking in to it as you will find out when you examine the book – InshAllah Taala.
This book is akin to a sword striking the neck of every unqualified claimant to being a Shaykh in this time. This book will bankrupt him because he will find that he is divorced from the akhlaq of righteous people just as snake sheds its skin.
I know a group of people who have become aware of this book and are grieved, if it was possible for them to steal it and delete its contents they would do so out of fear that a person who holds them in esteem will read it and as a result change their view regarding them when they see that they do not possess the akhlaq of the righteous people whom they claim to be the deputies of.
It is more appropriate that they had rejoiced and been happy at its being written for all of it is sincere advice, and they will not find anyone in this age who will give the likes of this advice.”