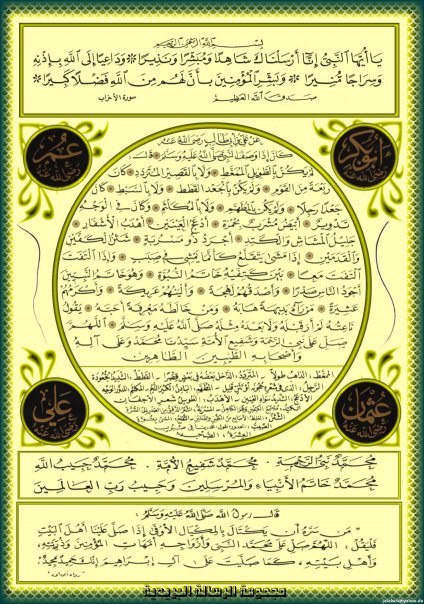 A while back someone mentioned to me the above translation of the verse, what struck me immediately was that it differed with the translations of it which I had long been accustomed to.  I have not had the opportunity to refer to the numerous translations of the Quran which now exist in English, but perhaps experts in Arabic can comment with greater authority, or maybe readers can post the translations of this verse that they have encountered.

I say:  This verse and hadith necessitates that when the highest assembly (Mala al-Ala) remember Allah (Most High) they also make remembrance of Muhammad (Allah bless him and give him peace).  It has been mentioned previously that it is written on the leg of the Throne, and it has passed in Surah al-Buruj that which al-Baghawi reports with his chain from Ibn Abbas that he said:  In the heart of the tablet (lawh) is ‘There is no god but Allah alone, His religion is Islam and Muhammad is His servant and Messenger’.

Ata narrating from Ibn Abbas that he said:  ‘He means the Adhan, Iqamah, Tashahhud and sermon on the pulpits, for if a servant worships Allah and affirms Him in everything but does not bear witness that Muhammad is the Messenger of Allah (Allah bless him and give him peace) will not benefit by anything and will be a disbeliever…’

And it is said:  He raised him by taking his covenant from the Prophets and necessitating them to have faith in him and affirm his virtue.