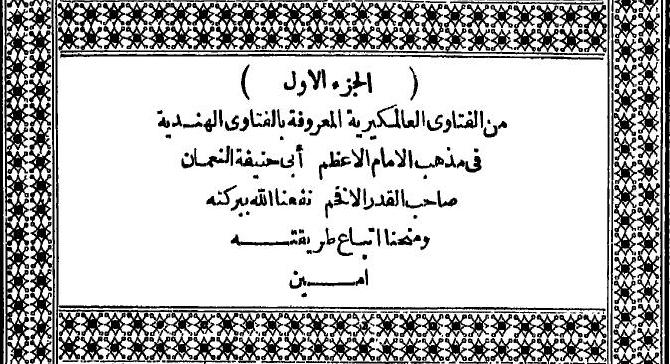 Salam.  As you some of you maybe aware, the ‘Fatawa Alamgiri’ or ‘Fatawa al-Hindiyyah’ as it is better known outside the Indian subcontinent was compiled by a panel of scholars on the orders of the Moghul Emperor Alamgir.  Perhaps Hanafi fiqh experts can comment in greater detail regarding its merits and importance within the madhab.  I found the following incident mentioned by Shah Waliullah which sheds some light on the process of the works codification.  Shah Sahib said in his ‘Anfas al-Arifin’ (p.74):

My respected father said that one day when reviewing the portion assigned to me of the Fatawa Alamgiri I found such a passage in which the example of the legal ruling was mixed up.  I referred back to the works which were the source of this ruling.  From reading them it became known that the issue was taken from two books, and that in each book it was explained in a different manner.  The author of the Fatawa Alamgiri had joined both passages together and thus because of this the example of the legal ruling had become altered.  At this point I added a note in which I wrote: ‘He who does not understand the religion has mixed up here with this mistake, and its correction is the following…’

In those days Alamgir was extremely focussed on the arrangement and codification of this book, and Mulla Nizam would daily read one or two pages to the Emperor.  When he reached my note which differed it so happened that he read the note along with the text in one breath.  The Emperor sat up and asked: ‘What kind of passage is this?’

Mulla Nizam in this gathering averting the difficulity temporarily said: ‘I have not had the opportunity to look through this, tomorrow I will discuss it in detail’.

When he returned home he was angry with Mulla Hamid and said that: ‘I had left this part of the Fatawa in your trust, you embarrassed me in front of the Emperor’.  He asked: ‘What is this wording?’

Afterwards he expressed his displeasure to me.  At this I presented the two books which were the sources of this legal ruling and the doubt related to the ruling and the confusion of the passage was made clear in such a manner that everyones eyes were opened.  After this day this group of the Mufti’s became envious of me, and the apparent reason of my removal was this incident.  And Allah knows best.