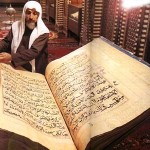 Every so often in our community I hear of their collecting together and burying copies of the Quran which have aged and are no longer useable.  When looking through the Mawsuah al-Fiqhiyyah (38/23) I came across a mention of this practice along with a referencing to the major works in the Hanafi school.  The details are as follows:

The Hanafis are of the view that if a copy of the Quran becomes worn or damaged such that it can no longer be read from, it is placed in a clean cloth and buried in a placed which will not be disturbed or walked over.  Just as a Muslim when he dies is buried out of honour for him.  The Hanafis said that soil should not be piled over it except when a roof structure is placed over the copy of the Quran, so that the soild does not reach it.

They also said that it is prohibited to burn it with fire, this is reported from Ibrahim al-Nakhai, and was also the view of Qadi al-Hussain from the Shafis, whilst Imam al-Nawawi said it was disliked.