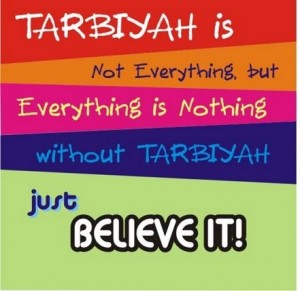 For those with children residing in non Muslim countries of the West the issue of raising children is one of great concern. The seeming downward spiral in morals and behaviour in popular culture is disturbing, and is churning out a new generation more dysfunctional to the ones previous to it.  More can perhaps be written on this in the future Insh-Allah.

I recently took off the shelf my approximately 10 years old copy of Mufti Taqi al-Uthmani’s excellent commentary on Sahih Muslim entitled Takmilah Fath al-Mulhim.  I had not looked through it seriously for a long time, but after opening it soon remembered why it had been a work Ihad often looked through on a regular basis.  I thought I would share the following brief extract which highlights the care and attention our predecessors took in the upbringing of their children.

Mufti Taqi whilst discussing a narration regarding the discouragement of a child being breast fed by individuals of deficient character wrote the following: (6/39-40 of the Mawsuah edition):

There is another hadith related on this subject, which is narrated by al-Qudai from the hadith of Salih bin Abd al-Jabbar from Ibn Jurayj from Ikrimah from Ibn Abbas in a marfu form, “Fostering (breastfeeding) changes the temperament/character of people”… Al-Sakhawi said after his citing it “Similar to this is when Shaykh Abu Muhammad al-Juwayni entered his home he found his son Imam Abu Ma-ali being breastfed by a woman other than his mother, so he took him from her. He lowered his head, wiped his stomach and entered his finger in his mouth and continued to do so until the milk was vomited….When the Imam grew older, during a debate if he made a mistake/slipped up he would say, “This is from the remainder of that breastfeeding.”

Al-Izz al-Dirini said, “The normal pattern is that a person who is breastfed by a woman will be predominated by her character, whether it be good or evil.” End of al-Sakhawi’s words in Maqasid al-Hasanah (p.227, 228 no.524).

We ask Allah (Most High) to protect us and all of our children; Amin.