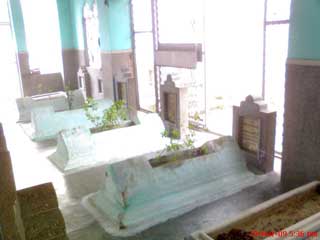 Reading through a passage the Anfas al-Arifin reminded me of observations and discussions which I had with some people over a period of time, I thought I would present some of these along with the passage which reminded me. [Photo above is said to be of the graves of Shah Abd al-Rahim, Shah Waliullah and Shah Abd al-Aziz al-Dehlawi all next to each other.  May Allah have mercy on them all and allow us to visit them]

Some scholars have noted that the Darse Nizami programme which is widespread in the Indian subcontinent has gone through much change recently, and has been described by some as a “dumbing down’ of the curriculum.  One of the first casualties it appears was the detailed study of the Persian language which means that students are no longer able to directly access the rich corpus of works written in Persian, and have to rely (like myself) on translations.

Another casualty which has been identified of late are the subjects of: Philosophy, Mantiq, and in some Madaris: Aqidah. Not being a student of Madaris I cannot comment in greater detail, I am sure concerned able students/scholars who are familiar with the Madaris scene will discuss this in a productive manner.

Related to the above has been the noted decline in the science of internal purification, otherwise known as tasawwuf.  Speaking to friends who have studied in Madaris, and from personal observations (both of which I am not claiming to be exhaustive). When looking at the Indo-Pak subcontinent (and related communities in the West)  two main trends can be identified.

1) Young Dar al-Ulum graduates barely out of their teens who have been authorised as Sufi Shaykhs.  It is evident from their speech and responses to queries that their understanding of tasawwuf does not seem to go beyond a very simplistic understanding of this science.

2) Ignorant descendants/followers of famous Scholars of tasawwuf from the past who may be lax in the following of the Shariah and also have a simplistic understanding of the science which often involves ritualistic cultural practices.  Here the Shaykhs role is to eat, collect money and write tawiz.  You will often find in addition to this a shrine of a noble scholar which has been turned into a money making scheme.

The two categories above are trends and not all those who claim to be Sufi Shaykhs fit exactly into both.  Both of the two groups and a number of others not included in the above do not appear to have a grounding in the complex texts on tasawwuf which were studied in the past, nor appear familiar with the terminologies and spiritual exercises of the very sufi orders (turuq) that they aim to teach others.

Another negative effect has been the disillusioning of others from the science of tasawwuf, especially with category 2 above- whereas at least in category 1 the shariah is being followed and nothing unlawful is being committed, nor are innocent people being taken advantage of.

In light of the above please find a brief passage below from the Anfas al-Arifin of Sayyidi Shah Waliullah al-Dehlawi which gives a glimpse in to the way of our Akabir.  Indeed the whole of the Anfas al-Arifin is an amazing work which furnishes immense detail into the depth of mastery of our Akabir in the science of tasawwuf, and serves as a yardstick to measure contemporary claimants to the Waliullahi inheritance.

Please note: The above is not to deny the existence scholars within the Indo-Pak subcontinent (and related communities in the West) who are  firmly grounded in the science of tasawwuf, the above is a general observation and cannot be applied to everyone.

Sayyidi Shah Waliullah al-Dehlawi (Allah have mercy on him) writes in his  Anfas al-Arifin (p.181-182):

My respected father had great veneration of Shaykh Muhiy al-Din Ibn al-Arabi and would say: ‘If I wished I would explain the Fusus on the minbar and would to prove all of its issues with evidences from verses of the Quran and Hadith! And would explain in such a way that nobodies doubt would remain’.

However despite this he would refrain from openly mentioning the unity of existence (wahdat al-wujud) because most of the people of that time were unable to understand it, and by misunderstanding they would be embroiled in disbelief and heresy. Despite this precaution in some of his speeches the colour of wahdat al-wujud would shine through.