Desirable Acts For Eid al-Fitr From The ‘Fatawa al-Hindiyyah’ 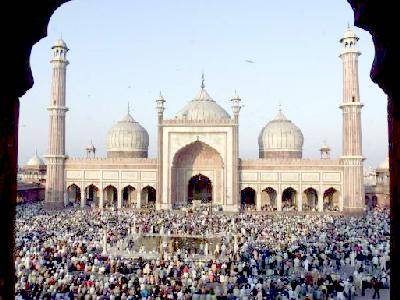 I found the following extract of benefit in the classic fiqh compendium compiled by the committee of scholars under the orders of the Moghul Emperor Aurangzeb.  Some brief notes have been appended at the end of the extract, and clarifications have been made by myself in the form of brackets in the main text.  We ask Allah (Most High) to give us the tawfiq to be able to practice as many of these desirable acts as possible this coming Eid.

The authors of the ‘Fatawa al-Hindiyyah’ (1/165) in “Chapter 17 – Regarding The Two Eid Prayers” outline some of the desirable acts for the day of Eid as the following:

“It is desirable (mustahab) on the day of Fitr for a person to bathe, use a toothstick and wear their best clothing as mentioned in ‘al-Quniyah’, whether they are new or (K:old clothes which) have been washed as mentioned in ‘Muhit al-Sarakhsi’.

It is desirable to wear a ring and apply perfume, tabkir – which is to wake early, ibtikar -which is to hasten to the prayer area (مصلى), to give charity (sadaqat ul-fitr) before the prayer, to offer the morning prayer in the masjid of ones area, going out to the prayer place (مصلى) walking and to return via another route as mentioned in ‘al-Quniyah’.

There is no harm in riding to the Friday (Jumah) prayer and the two Eid prayers, however walking is superior in relation to the one who is able to do so as mentioned in ‘al-Zahiriyah’.

It is desirable in the Eid al-Fitr to eat before going out to the prayer place (مصلى) three, five or seven dates more or less as long as they are an odd number, and if they are not available then that any sweet thing that he wishes as mentioned in ‘al-Ayni Sharh al-Kanz’.

If he does not eat before the prayer he is not sinful and if he does not eat after it all the way to Isha, then perhaps he will be sinful[1] for this.  Al-Adha is like al-Fitr in these matters except that he refrains from eating until he offers the Eid prayer as mentioned in ‘al-Quniyah’.

And in ‘al-Kubra’ it is mentioned that: Is eating before the prayer on the day of Adha disliked (makruh)?  There are two narrations regarding it.  The chosen one is that it is not disliked however it is desirable that he does not do so…

Going out to the Eidgah for the Eid prayer is recommended (sunnah) even if the Jami Masjid can accomodate them all, upon this are the generality of the scholars.  This is the correct view as mentioned in ‘al-Mudmirat’…

A person should go out walking to the prayer area with tranquillity and reverence, lowering their gaze from all that should not be seen as mentioned in ‘al-Mudmirat’.

To recite the Takbir loudly on route in the al-Adha and to halt it when he reaches the prayer place, and this is the view which has been adopted.Iin al-Fitr the chosen view of the madhab is that he does not recite loudly and this is the adopted opinion as mentioned in ‘al-Ghiyathiyyah’, as for reciting silently then it is desirable as mentioned in ‘al-Jawharah al–Nayyirah’.

Addendum: [Regarding the rulings related to optional (nafl) prayers on the day of Eid]

[1] Al-Azami in his ‘Bahar al-Shariah’ uses the term عتاب meaning the person would be reproached or deserving of blame, whilst the edition of the ‘Fatawa al-Hindiyyah’ referred to uses the term عقاب which has been translated above.  As is evident both words have a similar spelling in Arabic which is open to the possibility of being misread by scribes or typists and thus leading to a difference of meaning, and Allah (Most High) knows best.