Dua for End of Hijri Year 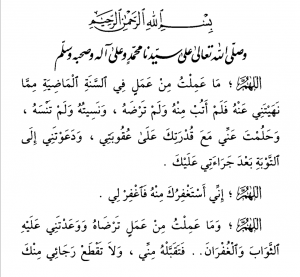 Please find above scans of the supplication to be recited thrice at the end of the hijri year, taken from Shaykh Abd al-Hamid Quds from Mecca’s work Kanz al Najah.

A quick translation is as follows:

To be repeated thrice. This is not from a Prophetic hadith but a general prayer which some Sunni scholars have found favourable.