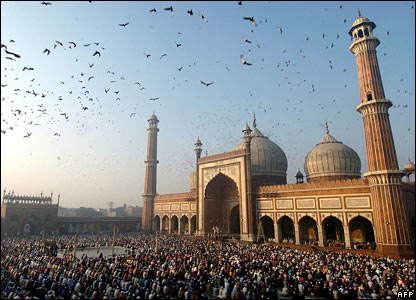 Readers of this blog might recall that we posted an extract of some rulings from the ‘Fatawa al-Hindiyyah’ related to Eid.  I thought I would add to that post with some additonal extracts from Shaykh Abd al-Hayy al-Luknawi’s commentary on the ‘Sharh al-Wiqayah’ entitled ‘Umdah al-Riayah’.  The main aim was to present a brief mention of *some* of the evidences in the Hanafi school, and Shaykh al-Luknawi’s work usefully presents the evidences in a succint manner (more on this at another time inshAllah).

In the extract below taken from (2/336 onwards) I have selected some passages from the ‘Sharh al-Wiqayah’ of Imam Sadr al-Shariah (in bold) and after the (-) sign the commentary of Shaykh al-Luknawi is quoted from.  I left out the some discussions from the commentary which might not be of immediate importance.  I pray that perhaps a revision of this hastily prepared article will allow for a greater  service of these texts and commentary.

It is liked on the day of Fitr to eat before the prayer- Meaning dates, three, five, seven, more or less, after they are an odd number.  This is transmitted from the Messenger of Allah (Allah bless him and give him peace) as in ‘Sahih al-Bukhari’ and others.  If it is not dates then another sweet thing.

Bathes– Due to that which is reported from the Prophet (Allah bless him and give him peace) that he would bathe on the two Eids, it was related by Ibn Majah.

Applies perfume- Meaning he uses perfume on his clothing and body.  The encouragement to do so is related in numerous hadith on Jumah from the authors of the Sunan works and others.  And it is known that the day of the two Eids is more important than it.

Wears his best clothes- Due to that that which is reported that: “The Prophet (Allah bless him and give him peace) would wear a red cloak on every Eid”.  And in a version “A red cloak which he would wear on the two Eids and Friday”, reported by al-Bayhaqi.

Gives the Fitr- Meaning the Sadaqah al-Fitr, and this is if giving it is compulsory, however the giving of it before going out to the prayer place (Musalla) is recommended.  This is transmitted from Ibn Umar, Allah be pleased with him, who said “The Messenger of Allah (Allah bless him and give him peace)  ordered us on the day of Fitr to give it before the people go out to the prayer”. Reported by al-Bukhari and Muslim.

And goes out to the Musalla- It is a place in the outskirts (الصحراء) where the two Eid prayers are offered and it is also called al-Jabbanah…however going out to al-Jabbanah is an emphasised Sunnah even if the Jami Masjid is large enough for them.  If they were to pray in the mosques of the city without an excuse their prayers will be valid but they will have left the Sunnah.  This is what is correct as mentioned in ‘al-Zahiriyyah’.

In ‘al-Khulasah’, ‘al-Khaniyah’ it is mentioned: The Sunnah is that the Imam goes out to the prayer place (al-Jabbanah) and delegates another person to pray in the city with the weak…

The basis of this is that the Prophet, Allah bless him and give him peace, would go out to the Musalla and would not offer the Eid prayer in his Masjid despite its virtue, except once due to the reason of rain as was detailed by ibn al-Qayyim ‘Zaad al-Maad’ and al-Qastallani in ‘Mawahib al-Laduniyyah’ and other than them.

The hadith regarding this issue are related in the Sunan works and others.  Disagreement has occurred between the scholars of our time regarding whether going out to the Musalla is an emphasized sunnah or desirable?  Most of them gave the legal verdict that it was an emphasized sunnah, and this is the just view in conformity with the foundational and subsidiary works and in accordance with the majority view.   And it is said that it is desirable which is an invalid opinion which has no evidence, and some have gone to extremes and said it is compulsory, and it is a rejected opinion which is given no credence, and the detail is in another place.

Without pronouncing the takbir loudly en route, he negated pronouncing takbir loudly such that if he pronounced takbir without being loud it is good- How can it not be so when al-Darqutni has reported that: “The Messenger of Allah (Allah bless him and give him peace) would pronounce the takbir in the Fitr from when he would come out of his house until he reached the Musalla”

He does not offer optional prayers-…The basis for this is that He (Allah bless him and give him peace) would offer the Eid prayer and would not pray before or after it, this is reported by the six Imams and others.  The majority take from this that to offer optional (nafl) before it is disliked, and He (Allah bless him and give him peace) did not do it despite his desire for the prayer.  If it was permissible he would have offered it at least once.  However Hafiz Ibn Hajr and others discussed this that the hadith does not indicate it being disliked but rather that the Eid does not have a Sunnah before or after it.

Before the Eid prayer- As for after it he does not offer optional prayers in the Musalla, there is no harm in it after his returning back home, rather it is good based on what is reported by Ibn Majah that: “The Prophet (Allah bless him and give him peace) when he would return to his home would offer two units”.

Except for the Sermon- For it is not a condition for the validity of the Eid prayer.  If he was not to deliver a sermon he would be sinful but the Eid prayer would not be invalidated, as opposed to the Jumah prayer which is not valid without a sermon.  This is the difference between the two sermons…

The Imam prays two units with them, he make takbir for the Ihram,- The summary of this method is that the takbir is pronounced first to start the prayer just like all of the prayers, then the thana which is reported is recited which is:

Then the takbir is pronounced thrice and these are the additional takbirs.  Then the Fatihah and chapter is recited, any chapter he wishes, and then pronounces takbir for bowing.  This is in the first unit, the takbirs in it are five including the takbirs of ihram and bowing.

In the second the Fatihah and Chapter is recited first, the three additional takbirs are pronounced, then the takbir for bowing.  This method is transmitted from Abdullah bin Masud, Hudhayfah, Abu Musa al-Ashari.  It was related by Abd al-Razzaq and Ibn Abi Shaybah in their Musannaf’s, Muhammad bin al-Hasan in Kitab al-Athar and others…

And al-Tirmidhi, Ibn Majah and others relate that: “The Prophet (Allah bless him and give him peace) would pronounce Takbir in the two Eids in the first (unit) seven before reciting, and in the other five before recitation”  and it is a transmission from Ibn Abbas (Allah be pleased with them all).  There is leeway in the matter due to differences of the companions statements and actions, and they are stars which ever them you follow you will be guided.

Recites the thana, then pronounces takbir thrice, recites the Fatihah and Chapter, then bows uttering the takbir.  In the second he starts with the recitation, then pronounces takbir three times, and another for bowing and raises his hands in the additional [takbirs]- As he would raise his hands in the Ihram, and release his hands between the additional takbirs, and place after the third takbir from it in the first unit, and there is no placement in the second unit after it, as in Majalis al-Abrar.

He delivers after it two sermons- Like the two sermons of Jumah with a brief sitting in between them, and there is no Adhan nor Iqamah. teaching in it the rulings of fitrah

Is like the Fitr in terms of rulings, however it is desirable to refrain-Meaning from eating, and it is reported from the Messenger of Allah (Allah bless him and give him peace) in Sunan Ibn Majah and Jami al-Tirmidhi and others.

Is not disliked to eat before it which is the chosen view.  He recites the takbirs loudly-This is transmitted from Ibn Umar (Allah be pleased with them) and in Eid al-Fitr it is also established that he pronounced loudly, reported by al-Darqutni and al-Bayhaqi.

En route and teaches in the sermon the Takbir of Tashriq and al-Udhiyah.

The Takbirs of Tashriq are compulsory- He said in طFath al-Qadirط: They have differed regarding it being compulsory or recommended.  The majority are of the view that it is compulsory, and the proof for its being recommended is His (Allah bless him and give him peace) habitual performance of it.

Which are his saying:

-These words are related from the Messenger of Allah (Allah bless him and give him peace) that he would pronounce them after the morning of Arafah till the Asr of the days of Tashriq as was reported by Ibn Abi Dunya.

From the Fajr of Arafah after every obligatory prayer offered in a congregation which is desirable, upon a resident in a city, and female praying behind a man,-Meaning a woman praying behind a man…however she does not recite loudly but says it silently.