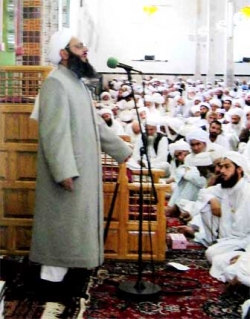 I came across a discussion on the Muslim Matters site today regarding the Friday khutba being delivered in the Arabic language.  The author unfortunately only cited a general comparative work on fiqh for the Hanafi position, as opposed to researching in the specialized and detailed works of the school.  Perhaps he might be unaware that Mufti Taqi Uthmani has a translated work in English which covers this issue thoroughly and has been available for some time.

Shaykh Abd al-Hayy al-Laknawi in his Arabic notes to the famous Hanafi legal text Sharh al-Wiqayah briefly discusses the nuances of the Hanafi position on this issue.  I thought it might be useful to share with readers, this is what he said [Umda al-Riayah 2/324]:

“It is not a condition that it [the khutba] be delivered in Arabic.  If he was to deliver the sermon in Persian or other than it then it is permissible- this is what they have said.  What is meant by permissibility is its being permissible in relation to the prayer, in terms of it being sufficient in order to fulfill the condition, and the prayer being valid.  General/absolute permissibility is not meant, for there is no doubt that the khutba delivered in other than Arabic is in contravention of the sunnah passed on by the Prophet (Allah bless him and give him peace) and companions (Allah be pleased with them all), thus it is prohibitively disliked (makruh tahrimi) as is the reciting of Persian and Hindi poetry within it.  And we have detailed this in our essay Akam al-Nafais fi Ada al-Adhkar bi Lisan al-Faris.”