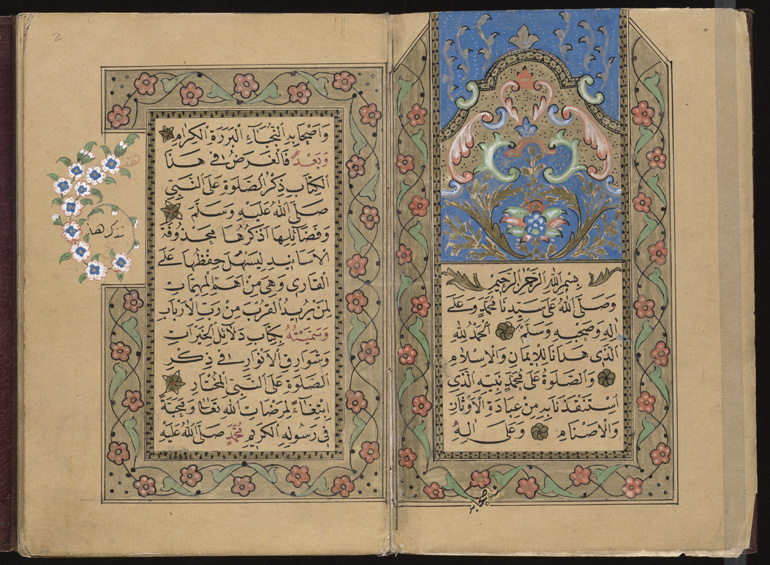 Salam.  I recently came across the biographical work on the Sufi’s of the Maghrib called ‘Al-Mutrib bi Mashahir Awliyah al-Maghrib’ by the contemporary Shadhili scholar Shaykh Abdullah al-Talidi described by some as a ‘Salafi Sufi’.  I wanted to post something from his entry from Imam al-Jazuli, the author of the famous manual of sending blessings upon the Prophet (Allah bless him and give him peace), the ‘Dalail al-Khayrat’.  The biographical entry below is adapted/extracted from his entry which starts at p.143 of the aforementioned work.  I have quoted Shaykh al-Talidi directly verbatim at some points of relevance.  May Allah have mercy on all those mentioned in this post, all those who have read the ‘Dalail’ and may He (the Exalted) enable us to finally meet and benefit from Shaykh al-Talidi who is currently living in Tangiers.

Sayyidi Muhammad bin Sulaiman al-Jazuli
He is the Shaykh, the scholar, the gnostic, pious friend of Allah, the barakah of the city of Marrakesh:  Sayyidi Muhammad Fatha bin Abd al-Rahman bin Sulaiman al-Jazuli.  He was of noble lineage and was born is his city of Jazula in Sus.  It was there where he was raised and where he studied the Quran, then began his quest for seeking knowledge.  He also travelled to Fes where he stayed for a time, and where he met the gnostic Sayyidi Ahmad Zarruq.

Imam al-Jazuli was firmly grounded in the fiqh of the Maliki school, and it was said that he had memorized the ‘al-Mudawwanah’ and other works.  However he focussed away from all of this and busied himself with the worshipping of Allah (the Most High) practising abstinence and devoting himself to the sending of Salutations and blessings upon the Beloved al-Mustafa (Allah bless him and give him peace).  He withdrew himself from the company of his friends and other people and restricted himself to his home.

Excellence Of The Dalail And a Defence
Shaykh al-Talidi said (p.144):

What is meant is that the ‘Dalail al-Khayrat’ is priceless and there is nothing similar to it in its genre, the writer of these words is from those who has witnessed and experienced its blessings.  The book by the praise of Allah (the Most High) does not contain that which the author can be criticized for except for some hadith which are fabricated or have no basis.  And this is what a book is not free of whose author does not possess knowledge of hadith.  As for that which they criticised it for such as his words: ‘And send blessings upon our Master Muhammad by the number of your knowledge’…it is interpreted and understood in a good way as is known from the answer of Abul Mahasin Sayyidi Yusuf al-Fasi as in ‘Mumti al-Asma’ and ‘Mirah al-Mahasin’.  As for that which it contains of intercession by means of the Messenger of Allah (Allah bless him and give him peace), seeking a means by him and calling out to him by his name ‘Ya Sayyidina Muhammad’.  The objection to this is from the whisperings of the Wahabi’s and their false drivel (tarhatuhum al-batilah).  And in the pure sunnah and language of the Arabs is that which is evidence for this as is known by the people of the correct knowledge and is mentioned in the books in refutation of the Wahabi’s and their followers.

I sincerely advise all Muslims to regularly recite the ‘Dalail al-Khayrat’ for the one who regularly (recites it) along with reflection on the greatness of the noble Messenger and with love towards him will be successful if Allah (the Most High) wills.

Spiritual Path And Training Of Others
Imam al-Jazuli after his authoring the Dalail met the gnostic Sayyidi Muhammad bin Abdullah Amghar, from whom he took the spiritual path and entered the spiritual retreat (khalwa) where he remained for 14 years. His litany was thousands of ‘basmalah’ and a number of complete recitals of the Dalail and a quarter of the Noble Quran every day and night.  After this he set out in his effort of guidance and spiritual training of others, and with the generosity of Allah (the Most High) received a large number of students which some such as Sayyidi Mahdi al-Fasi in ‘Mumti al-Asma’ put at 12,656 disciples (murid’s).

His Passing Away
Sayyidi Muhammad al-Jazuli also travelled to the East, performed the pilgrimage rites and spent some time there during which he met some of the notable scholars of that time.  After this he returned to his homeland and took the city of Asfa as his residence.  However its inhabitants showed him emnity whose end result was his having to leave it.  He then returned to homeplace of jazulah and remained there till his passing away in the year 870 Hijri, may Allah the Most High be pleased with him.  77 years after his death his body was transported to Marrakesh and buried there.

Some Of His Excellent Virtues
Imam Abu Abdullah al-Qassar (Allah have mercy on him) said: Our Shaykh, Sayyidi Muhammad al-Jazuli al-Shadhili had immense love for him (Allah bless him and give him peace).  It was said to him: I have excelled/given preference to you above your contemporaries due to the large amount of your sending blessings upon my beloved Muhammad (Allah bless him and give him peace).

And in ‘al-Mumti’ he (Allah be pleased with him) said:  I saw the Prophet (Allah bless him and give him peace) and he said to me:  I am the adornment (zayn) of the Messengers, and you are the adornment of the friends of Allah (awliyah).

The Transfer of His Body to Marrakesh 77 Years After his Death
Ahmad Baba and al-Fasi mention in ‘al-Mirah’ that when they exhumed and transported him to Marrakesh  which was 77 years after his death and burial in Jazulah, they found that there no change had occured to his body and it has not decomposed.  Such that the traces from the shaving of his head were still apparent on his body in the same way as they had been the day he passed away.  One of the people pressed his finger on his face and the blood beneath the pressed skin of Imam al-Jazuli’s face was seen to move, when the man lifted his finger the blood was seen returning back just as it would with a living person.  Sayyidi al-Mahdi explained this in ‘al-Mumti’ by saying that Imam al-Jazuli was poisoned and therefore was deserving of being considered a martyr.

The ‘Dalail al-Khayrat’ is recited by him throughout the day, and next to him is a masjid in which where the daily prayers are offered.  People set out to visit him and seek blessings by giving him greetings and by supplicating (by his tomb).  Allah عز و جل has honoured me -and to Allah belongs all praise- to visit his tomb many times.

An Incident With His Father
Shaykh al-Talidi said:

They mention that when he was in Fes secluding himself in his home for worship he wrote on the walls of the place the word ‘death’.  When he withdrew from people and his friends one of the students mentioned to his father- who was in Marrakesh- that your son practises alchemy (al-Kimiya) so his fathered travelled to him.  When he entered upon him and saw what was written on the walls of the house…he left and went back reprimanding and blaming himself for what he had done.

Another Work By Imam al-Jazuli Recited By Some
Sayyidi al-Jazuli (Allah be pleased with him) has another work called ‘Subhan al-Daaim’ which he compiled for his children and women folk of his family.  This is regularly recited by the ‘Isawiyyun’ the followers of Sayyidi Muhammad bin Isa who is from the students of the students of al-Jazuli.

Note: Here ends this draft which is in need of revision.  Allah bless and send peace upon our Master Muhammad, his family, companions and all those who follow them with goodness till the last day.