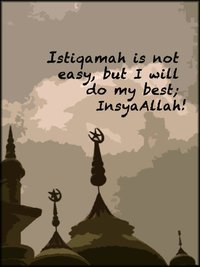 Please find below another extract from Shaykh Muhammad Hayat al-Sindi’s commentary on the 40 hadith of Imam al-Nawawi. All text in bold is the wording of the hadith al-sharif, the rest is commentary.

On the authority of Abu ‘Amr, though others call him Abu ‘Amrah Sufyan bin ‘Abdullah, radiyallahu anhu, who said:

I said: “O Messenger of Allah, tell me something about Islam which I could not ask anyone about except you.” He answered: “Say: ‘I believe in Allah’, and then stand firm and  be steadfast.”

Sufyan bin Abdullah bin Rabiah bin al-Harith al-Thaqafi al-Taifi.  He was a companion who was employed by Umar for Taif (Allah be pleased with him).

Sufyan (Allah be pleased with him) said I said: “O Messenger of Allah, tell me something comprehensive and sufficient about Islam which I could not ask anyone about except you.”  rather I will suffice with the explanation I learn from you.

He answered: “Say: with your tongue and affirming in your heart ‘I believe in Allah’, that He is the God who is alone in being divine and described with elevated perfection, free from base qualities, and that you regard that which He has regarded as correct to be correct and that which He regards as false as being false.

And then stand firm and be steadfast.” upon that which necessarily follows from this statement by attaining the love of Allah (Most High) by means of that which results in His pleasure and love, and avoiding His displeasure by leaving that which necessitates His anger.

This is a comprehensive statement, and acting upon it requires knowledge of those things which draw one closer to Allah (Most High), and those things which distance one from Him (the Glorified).  Likewise the giving of each person their due right, and Allah alone gives success.