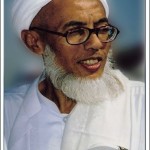 Please find below a translated extract from Habib Zayn bin Sumayyit’s basic primer on Sunni orthodoxy and methodology, entitled Ajwibah al-Ghaliyah.  In view of its usefulness I made some personal notes on this text a number of years ago (which I am still trying to locate).  Unfortunately my copy of the second edition was burnt along with a number of my other books recently, may Allah (Most High) reward Sidi Zyad Hossen for sending me the scans of the second edition.  Please find below a sample of one of the chapters (p31-32):

“His (Allah Bless Him and Give Him Peace) Special Qualities

Q: What are his (Allah bless him and give him peace) special qualities?

A: Our Prophet Muhammad (Allah bless him and give him peace) is distinguished over all of the Prophets by means of numerous special qualities:

From them is: That he is the seal of the Prophets and Messengers, and that there is no Prophet nor Messenger after him. He (Allah bless him and give him peace)said: ‘I am Muhammad the unlettered Prophet, there is no Prophet after me. I have been given the comprehensive word and its seal’. [Ahmad (1:172)]

From them is: His superiority over the Prophets,Messengers and all of creation. Abu Saeed al-Khudari(Allah be pleased with him) said: ‘The Messenger of Allah (Allah bless him and give him peace) said: ‘I am the master of the children of Adam on the day of Judgement, and it is no boast. In my hand will be the banner of praise, and it is no boast. There will be no Prophet on that day-Adam and other than him- except below my banner. I am the first that the earth will open up for and it is no boast’.[Al-Tirmidhi (3148, 3615) and he said it was a hasan sahih hadith]

And from them is: The generality of his (Allah bless him and give him peace) Messengership to the Jinn, humans, Arabs and non-Arabs. Jabir (Allah be pleased with him) said: ‘The Messenger of Allah (Allah bless him and give him peace) said: ‘I have been given five things which have not been given to those before me: I was given victory by fear the distance of a month. The earth was made a pure masjid for me, wherever a man from my community needs to pray, should pray. War booty was made lawful for me and it was not lawful for anyone before me. I have been given intercession, Prophets were sent to their communities specifically, and I have been sent to the whole of mankind’.[Al-Bukhari (328) Muslim (521)]

And from them is: Allah (most High) made his community the best of communities, and abrogated through his shariah all other shariah’s. Allah (most High) said: ‘It is He who sent His Messenger with guidance and the true religion to manifest it over all other religions, even if the polytheists hate it’ [Tawba:33].

He (Most High) said: ‘He who follows other than Islam as a religion, it will never be accepted from him. And in the next life he will be from the losers’ [Al-Imran:85]

He (Allah bless him and give him peace) said: ‘No one from this ummah hears of me, a Jew or a Christian, and then dies and does not believe with that which I was sent with, except that he is from the people of the fire’. [Muslim (153)]