Mawlid And The Scholars of India-2: Shaykh Rehmatullah al-Kairanwi 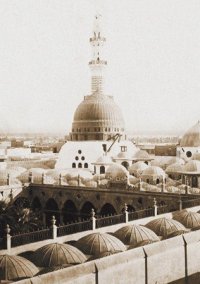 In addition to what we mentioned previosuly regarding the scholars of India and the Mawlid: please find a rough draft of selections from the taqriz of Mawlana Rehmatullah al-Kairanwi (one of the major scholars linked to the Madrassa al-Sawlatiyyah) to the ‘Anwar al-Satia’ of Mawlana Abd al-Sami al-Rampuri, the student of Haji Imdadullah Muhajir Makki. This translation is still under review so please be aware of this.  I have something from Mawlana Abd al-Hayy al-Luknawi aswell which Insha-Allah I hope to post in the near future.

I have listened to this treatise closely from its beginning to the end and I very much liked its unique style. If I was to write something describing it people would it interpret as exaggeration. Therefore refaining from this I will suffice with a prayer that God (Most High) give its author a beautiful and immense reward, and that He break the unwarranted fanaticism of the critics of this treatise, and guide them to the straight path. I also pray that He grant blessings in the knowledge, fayd and health of its author. This is the belief of My noble teachers and myself regarding the Mawlid Sharif from the past, and is currently so…

The belief is that the gathering of Milad be organised with the condition that it be free of unlawful acts such as singing, musical instruments and excessive lights. Rather- based on the authentic narrations- mention is made of the miracles and birth of Hazrat (Allah bless him and give him peace). After this if good food and shirini is distributed,  there is no problem in this.

Rather in this age when from every direction there is the commotion of priests, and in market places the religion of Hazrat (Allah bless him and give peace) is criticised, and from the other direction the Arya people (God guide them) like the priests are causing a greater commotion than them.

These gatherings with those conditions which I have mentioned above are at this time a communal obligation (fard kifayah). I say to Muslim brothers by way of sincere advice to not stop from holding such gatherings, and most certainly to not pay attention to those critics who hold unwarranted views due to their fanaticism.

If in the specifying of the day there is not the belief that no other day other than this is permissible, then there is no problem with this, and its permissibility is established very well (ba khubi).

Since 600 years the standing (qiyam) at the time of the mention of the birth has been declared permissible by the majority of the righteous scholars, scholars of kalam, Sufi’s, scholars and hadith specialists. The author of the treatise has made these matters apparent very well.   I am amazed at these critics who blindly follow/make taqlid of Fakihani Maghribi and lump together the majority of the righteous predecessors, scholars of kalam, hadith specialists and Sufi’s, and label them as misguiding and misguided and do not fear God that included in this are these people’s teacher and spiritual guide such as Hazrat Shah Abd al-Rahim Dehlawi and his son Shah Waliullah Dehlawi, and his son Shah Rafi al-Din Dehlawi and his brother Shah Abd al-Aziz Dehlawi, his grandson Mawlana Muhammad Ishaq Dehlawi (Allah sanctify their secrets) all of them are included in being misguided and misguiding…