Mawlid and the Scholars of India (4): Mawlana Abd al-Hayy al-Luknawi 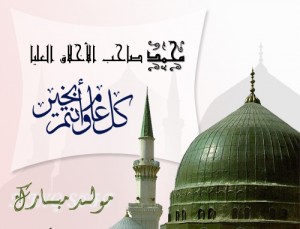 Fatwa on the Mawlid

The following is a clear legal verdict regarding the mawlid from a scholar who is respected across the different schools prevalent in the Indian Subcontinent as well as the Arab world.

In the course of an answer to a detailed question regarding the legal verdict of the Mawlid gatherings, Mawlana Abd al-Hayy al-Luknawi after discussing the issue of innovation proceeded to say the following:

“After these introductory points I say the mention of the Milad in of itself is not an innovation of misguidance due to two reasons:

First:  The dhikr-e-milad is that in which a recitor (dhakir) recites a verse or hadith and in its explanation makes mention of some of the prophetic virtues and miracles.  He also mentions a little of the events of the birth, lineage and the miraculous events which manifested at the time of the birth; as has been written by Ibn Hajar Makki (Allah have mercy on him) in Nimat al-Kubra ala Alim bi Mawlid Sayid Walad Adam.

It existed at the time of the Prophet and the companions, however it was not known by this name.  It will not be hidden to the experts of the science of hadith that the companions in gatherings of admonishment and learning of knowledge would mention the Prophetic virtues and miracles.  It is mentioned in the Sahih works that Master of the worlds (Allah bless him and give him peace) would seat Hassan bin Thabit (Allah be pleased with him) on the pulpit in the masjid, who would recite poems in praise of the prophet…and He [Allah bless him and give him peace] would pray for goodness for him and say, ‘O Allah, aid him by means of Gibril (Ruh al-Quds)’.

It will not be hidden to those who view the collection of Hassan’s (Allah be pleased with them) poetry that his poems contain mention of miracles, events of the birth and noble lineage etc.  Thus reciting verses such as these is exactly dhikr-e-milad.  The account of Hassan’s (Allah be pleased with him) reciting of verses in the masjid is also present in Sahih al-Bukhari and in reality there is no difference between the dhikr-e-milad and this incident.  The matter that this dhikr’s name was not Majlis-e-Milad is superfluous.

Secondly if there is some discomfort that in of itself the existence of the mention of the birth and virtues is established, however the inviting of people in dhikr-e-milad is not established, then it will be countered that the spreading of knowledge by means of gathering and calling of people is established from hadith.

Apart from this there is discussion regarding the mention of the birth, and for arguments sake if it is accepted that the customary specification (takhsisat urfiyyah) are not established from this gathering, then the dhikr-e-milad  being impermissible is not necessitated.

Second:  If we were to accept that the mention of the birth was not present during the time of the three (generations) we still say that in the sacred law the principle is established that ‘Every method from the means of spreading knowledge is recommended’.   Ibn Majah (Allah be pleased with him) narrates from Hadrat Abu Hurayrah (Allah be pleased with him) that the Messenger of Allah  (Allah bless him and give him and his family peace) said, ‘From that which reaches a believer of his good actions after his death is the knowledge which he spread.’

Likewise Bukhari relates in his Book of Knowledge from Umar bin Abd al-Aziz (Allah be pleased with them both) that, ‘Knowledge should be spread and you should sit so that the one who does not know learns.  For knowledge is not lost as long as it is not hidden.’

Allamah Suyuti (Allah have mercy on him) in some of his treatise has written commenting on the hadith, ‘When the son of Adam dies…’ that, ‘The scholars have interpreted continuous charity as being charitable endowments (waqf); and knowledge which is benefitted from as being written works and teaching.’

Bukhari relates from Wail (Allah be pleased with him) that he said, ‘Abullah bin Masud would  admonish people on Thursdays.  A man said to him: O Abu Abd al-Rahman, if only you would remind us each day.  He replied that: I am withholding from this due to my fear of your becoming tired.  I am admonishing you as just as the Prophet  (Allah bless him and give him and his family peace) would admonish us, out of concern for us becoming tired.’

And do not be mistaken that when the dhikr-e-mawlud  was not present in the time of the three (generations) nor was it evident during the time of the Mujtahids, then why is it possible to give a legal verdict (fatwa) for its permissibility?

…If we accept were to accept that the dhikr-e-mawlud was not present during the time of the three generations, nor that this ruling is related from the Mujtahids; however because in the sacred law the principle is established that each method from the means of spreading knowledge is recommended, and dhikr-e-mawlud is included amongst it.  Thus the ruling of it being recommended will be given, this is why the knowledgeable jurists and scholars of fatwa able to deduce such as Abu Shama, Hafiz Ibn Hajar, Suyuti and Shami [Ibn Abidin] and others (Allah have mercy on all of them) gave the verdict of it being recommended…

Yes, if there are unlawful specifications and rules added to the dhikr-e-mawlud then it’s being recommended will no longer remain, however this will then become something else due to which there will be no doubt created regarding the permissibility of the Milad.

Allah knows best the truth, and with him is the reward.  Written by the one hopeful of the forgiveness of his Powerful Lord: Abul Hasanat Muhammad Abd al-Hayy, may Allah overlook his manifest and hidden sins.”

Addendum:  Mawlana al-Luknawi has a number of answers relating to the seperate issue of the standing (qiyam) in a certain part of the Mawlid gathering, which have to be studied carefully to understand in his position.  In one fatwa he argues that those who rebuke those who do not stand in Mawlid gatherings are wrong, arguing that standing in the one specific part of the Mawlid had no reliable basis.  However in another fatwa he mentions that the people of the Hijaz stand in a part of the Mawlid and that it was present in the Mawlid al-Barzanji.  Thirdly, his commendation is present for the work Anwar-e-Satia by Mawlana Rampuri which defends the practice of standing at a part of the Mawlid.  Thus it would appear that Mawlana al-Luknawi regarded it as permissible to stand at certain parts of the Mawlid, whilst at the same time censuring those who criticised those who would not stand.  And Allah Most High knows best.