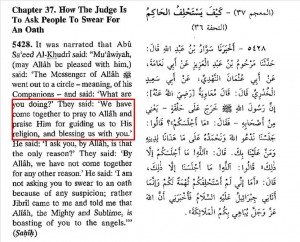 Once again the month of Rabi al-Awwal has witnessed the launch of campaigns to stop people attending gatherings known as “Mawlid”.  What I have found disturbing is the dissemination of misleading information on the issue from individuals who do not appear to be able to look calmly at the issue, but rather blindly copy and paste articles against the Mawlid without verifying the accuracy of what they are spreading.

The above hadith (from Sunan al-Nasai) is one of the clearest evidences for the permissibility of the Mawlid, and clearly shows the companions gathering together to thank Allah (Most High) and give thanks for blessing them with the Prophet (Allah bless him and give him peace).  Are the Mawlid gatherings not what is being described in the hadith?

I have more to say on this topic but do not have the time at the moment, however I will suffice with the following points as summaries of more detailed discussions.

1. Definition of Mawlid gatherings:   It is not a birthday gathering as in the conventional western sense, but a gathering mentioning the sirah of the Messenger of Allah (Allah bless him and give him peace) which without saying would include a mention of the blessed birth.  These gatherings usually include recitation of the Quran and singing of Qasaid, the vast majority of them being held throughout history until today without any haram actions intermixed.

2. Mawlid is an issue of Fiqh not Aqidah:  Being an issue of fiqh it was dealt with Muslim scholars of the past, the vast majority of whom gave the fatwa of its permissibility and it being recommended.  Amongst these giants of Islamic scholarship are Hafiz Ibn Hajar, Imam al-Suyuti, Ibn Abidin and numerous others including Shah Abd al-Aziz al-Dihlawi.  Likewise being an issue of fiqh which mainstream ulema gave fatwa on, it is not permitted to then condemn those who attend such gatherings where no unlawful practices take place.  Side note: I was astonished to read on an Arabic language site an author boldly claim that the permissibility of the Mawlid was only a minority position in Muslim scholarship and the majority held it to be impermissible?!? (Did the author accidentally miss the countless verdicts of it being permitted/recommended throughout the centuries?)

3. Two Approaches: Muslim scholars took two approaches to argue for Mawlid gatherings being permitted/recommended.  First:  Mawlid gatherings existed at the time of the salaf but were not known by this name (refer to the Fatwa of Shaykh Abd al-Hayy al-Luknawi and the hadith above).  Second:  Mawlid gatherings in this exact form did not exist at the time of the salaf but their basis is present in the Shariah which has given scope for them to take place, thus they cannot be considered as a bad innovation.  (This is the approach of Hafiz Ibn Hajar and Imam al-Suyuti).

4. All in a name:  If the name of Mawlid gatherings was changed to “Sirah Lesson” where some qasaid are also sung how many people would find it problematic?  Indeed if you were to invite them to such an event they would probably not even notice they were actually attending a Mawlid.  This is the approach I have seen being taken in Madinah al-Munawwarah where outside the place of a well known weekly Mawlid a sign reads ‘Majlis al-Sirah al-Nabawiyyah’.

5. Mawlid everyday:  Mawlids are held outside of Rabi al-Awwal and some scholars of the past are said to have held them everyday in the evening in their homes.  As with other lessons Mawlid gatherings are perhaps held once a week due to peoples time commitments and inability to attend everyday.  Thus to argue that they only take place in Rabi al-Awwal is incorrect and misleading.

6. Ignorance:  Cutting and pasting long articles on bidah and just repeating the flawed argument “Did the Prophet (Allah bless him and give him peace) hold Mawlid gatherings” betrays an ignorance of what the sunnah is.  Our question to such people is:  Do you regard the words and tacit approval of the Prophet (Allah bless him and give him peace) as constituing the sunnah? if so why have you mentioned only actions? If you do agree with us with the prophetic words and tacit approval being from sunnah then how can you claim that organising gatherings where the sirah and qasaid are read is not sanctioned from the sunnah?

Note:  The scan of hadith at the top of the post was highlighted by Shaykh Abdullah al-Hussaini al-Hashimi from Makkah in his work on the Mawlid, may Allah (Most High) reward him abundantly.

O Allah, send your blessings and peace on the light which manifested in this month.

6 thoughts on “Mawlid Hadith: Mawlid at the Time of the Companions”