Musalsal Hadith of the Handshake 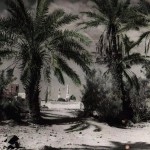 On this site I have previously uploaded a biography of Shaykh Abd al-Baqi al-Ayyubi, originally from Lucknow (India) who settled in Madinah the Illuminated and became one of the prominent ulema of his era in the Hijaz.  When discussing him with Shaykh Yahya al-Mulla, I was informed that Shaykh Yahya’s father would during his holidays from the Sawlatiyyah school in Makka travel to Madinah al-Munawwarah and study with Shaykh Abd al-Baqi.  He added that his father had a good relationship with the Shaykh and that he has in his possession documents signed by Shaykh Abd al-Baqi which belong to his father.  Shaykh Abd al-Baqi is perhaps best known for his work on Musalsal hadith narrations entitled Manahil al-Salsalah, which is regarded to be the most comprehensive work on this topic (though not exhaustive).

In the course of Shaykh Abd al-Baqi’s relating the various types of Musalsal handshakes he related the following incident which he narrates via the scholars of his home city Lucknow. The incident took place with the notable Indian scholar widely known in scholarly circles by his title Bahr al-Ulum (d.1810), who authored a number of works in the Islamic sciences, and whose relating of the following incident should be taken seriously, as it is from a pious scholar respected for his mastery of the Islamic sciences.

Shaykh Abd al-Baqi al-Ayyubi said the following on page 57 of his Manahil al-Salsalah:

We narrate the handshake of allegiance by means of the aforementioned chain, the story of which we narrate from our Shaykh who related it in Umdat al-Wasail hearing it from Malawi Abd al-Rab bin Bahr al-Ulum who heard it from Mulla Ala al-Din who has been mentioned earlier.

An Arab Shaykh came and went to him upstairs and greeted him with Salam.  Bahr  replied to his greeting and went back to his important research.

The Shaykh said: Will you not honour your guest?

At this he [Bahr al-Ulum] closed his book and turned his attention towards him.

The Shaykh said: Come with me,  a great person is calling you.

Bahr al-Ulum thus accompanied him until he came upon a rider upon a horse below a tree with his face covered.

The rider said to him:  Do you know that the Shaytan cannot impersonate your Prophet (Allah bless him and give him peace)?

Bahr al-Ulum replied: It is established in the Sahih hadith

The rider then said:  Do you know the physical description of your Prophet (Allah bless him and give him peace)?

Bahr al-Ulum replied:  Yes, and then proceeded to detail it

At this point the rider unveiled his blessed face and said: I am your Prophet and this is Abu Bakr al-Siddiq.

A cloth was then spread out for him and Bahr al-Ulum was ordered to take allegiance, and he took allegiance with the Prophet (Allah bless him and give him peace) by means of a handshake, and this was in the city of Rampur.

The Arab Shaykh was seen by Bahr al-Ulum’s students including the previously mentioned Ala, and [later] Bahr informed them of what took place.  The form of the handshake which we took is the joining of one hand with the other and thumb with the other.

Note 1:  For those who may have questions about the possibility of meeting the Messenger of Allah (Allah bless him and give him peace) in a waking state, Imam al-Suyuti and others have authored works where they argue such an occurrence is possible.