Nabi Allah Hud (Upon Him be Peace) 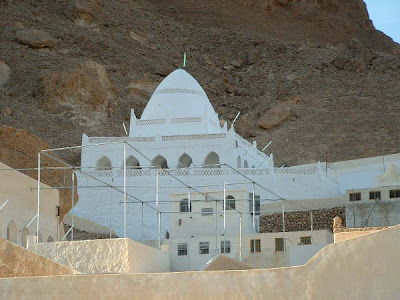 Salam. Found this following point of benefit about the fixing of a particular time for acts of worship which can sometimes confuse people, and specifically the visitation of Nabi Hud (Upon Him be peace) Found once again in Kashf al-Satoor (p.168) and adapted in my own words:
***

It is a common practice across the Muslim world for the singling out of certain times for acts of worship. Examples of this include the visitation of the grave of a certain pious person, or as the people of Hadramawt do (at their forefront the noble Ba Alawi’s) with the travelling to visit the grave of Sayiddina Hud (upon Him be peace) in the month of Shaban each year.[1]

This practice of theirs has a firm basis in the sacred law. Al-Bukhari reports in his Sahih (1193) and Muslim (1399) from Abdullah bin Umar (Allah be pleased with them both) that:

The Prophet (Allah bless Him and give Him peace) would come to Masjid Quba every Saturday walking and riding, and Abdullah (Allah be pleased with him) would also do this.

Al-Hafidh Ibn Hajar said in Fath al-Bari (3/69):
In this hadith, along with its various routes of transmission, is an evidence of the specifying of certain days for certain righteous acts, and to be regular in them. And in it is that the prohibition to travel to other than the three masjids does not mean that it is unlawful, as the Prophet (Allah bless Him and give Him peace) would come to Masjid Quba riding.