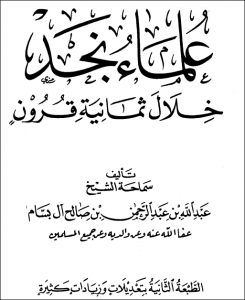 As mentioned elsewhere on this site, the evidence based method of teaching fiqh has seemed odd to me and radically different to the way other madhabs are taught in institutes of traditional learning.  Some people who seem to know nothing of fiqh except their understanding of it being the “weighing up” of evidences and following the “stronger opinion” may be puzzled to find endless pages of classic fiqh commentaries with the odd mention of an evidence.  They may also scoff at any rebuke of the contemporary “I am a Hanbali who does tarjih of the strongest opinion” which seems to be prevalent in Saudi.

I have detailed this elsewhere on this site and prepared a small powerpoint on this which I may upload soon inshAllah.  [Suffice it to say, Imam al-Shawkani’s Salafi commentary entitled Sayl al-Jarrar on a Shia Zaydi fiqh text sums up nicely what I am referring to].

I was therefore pleased to find the following passages in a work on the scholars of Najd by Shaykh Aal-Bassam (cover above) which succinctly highlighted the differences in approach to fiqh which came in to vogue after the emergence of Shaykh Ibn Abd al-Wahab.  He also mentioned the existence of other schools of fiqh in Najd in the not too distant past, and the existence of many scholars of Najd who opposed the movement of Shaykh Ibn Abd al-Wahab.

The selected quotes below begin from page 17 onwards:

From the time that we first know about the scholars of Najd until the appearance of Shaykh Muhammad bin Abd al-Wahab (Allah Most High have mercy on him), scholarly knowledge was primarily limited to fiqh, meaning the subsidiary matters of fiqh.

The predominant madhab amongst them was the madhab of Imam Ahmad bin Hanbal (Allah be pleased with him), along with the existence of others from the schools of the four Imams, except that the majority was that of the madhab of Imam Ahmad. Scholarly knowledge – regardless of the different madhabs – did not usually extend beyond comprehensive understanding of this field of knowledge.

Thus their engagement with the knowledge of Tafsir, Hadith and Tawhid was extremely limited. As for the sciences related to language, they did not concern themselves with them except for the science of Nahw and its concise works from which they learned that which was sufficient to rectify their language from grammatical mistakes.

Anything apart from this they regarded as a waste of time and a preoccupation from that which is superior than it. It was rare that anyone from them would go beyond Fiqh to the other sacred sciences or Arabic…

As for the Fiqh of the madhab of Imam Ahmad, then they had gained a complete mastery over it and paid significant attention to it, such that they taught its books in a detailed manner and researched its issues in a comprehensive and intricate way.

When the call (dawah) of Shaykh Muhammad bin Abd al-Wahab spread then this approach (ittijah) changed, with a greater variety in the intellectual culture and increase in sciences. Thus the primary focus became Tawhid not least the Tawhid al-Uluhiyyah, along with attention being paid to the Salafi books of Tafsir such as Ibn Jarir, Ibn Kathir, al-Baghawi and their like.

There was a focus on hadith and its central works and commentaries. Likewise the principles of these sciences were taught. The attention in fiqh – the subject of the lesson being the fiqh of Imam Ahmad bin Hanbal – was that if the well known position of the school (Mashur) was weak and another view (in the school) was more correct, then the preferred view taken was which was  supported by the evidence from the Book and the authentic Sunnah, meanwhile not going outside of the positions of the other Imams or some of them.

If you wish to compare between these two periods in relation to the research of matters of knowledge, then compare between the Fatawa of the scholars of Najd, some of which were copied by Shaykh Ahmad al-Manqur in his collection (Majmu’) and between the Fatawa which are compiled in Durar al-Saniyyah. You will see that in the first they confine themselves to the well known position (Mashur) of the Madhab, attempting to apply their answer in conformity with that which had been stated by the Hanbali jurists, free from citing evidences from the Book and the Sunnah.

As for the Durar al-Saniyyah, you will see that their Fatawa are sourced from the madhab of Imam Ahmad (Allah have mercy on him) except that they are mentioned alongside their evidences in the Sacred Law. Likewise you will find that they may go against the well-known position of the Madhab when the authentic evidence conflicted with the Madhab…the point is that the intellectual culture between the first and second time periods had changed.

Before the emergence of Shaykh Muhammad bin Abd al-Wahab and the unification of the country and centralising of education policy, all the four madhabs existed in Najd, except that the widespread madhab in it was the Hanbali madhab. The people of al-Kharaj on the other hand were predominantly upon the madhab of Imam Abu Hanifah and al-Shafii. From their scholars was Rashid bin Khanin al-Aidhi by way of lineage and Hanafi in madhab, a contemporary and opponent of Shaykh Muhammad [bin Abd al-Wahab] and his dawah.

I was informed by Shayh Rashid bin Khanin – our contemporary – …that he spent a lengthy time as a scribe for the Qadi of al-Kharaj, Shaykh Abd al-Aziz bin Baz, and that the [old] legal records and rulings which they found [for the area] were all issued by Hanafi or Shafii judges, and that scholars of the Khanin family were previously Hanafi…

In this book of mine I have written biographical entries for many scholars who opposed the Salafi dawah which was revived by the Islamic leader, reformer, Imam Muhammad bin Abd al-Wahab.