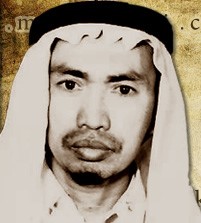 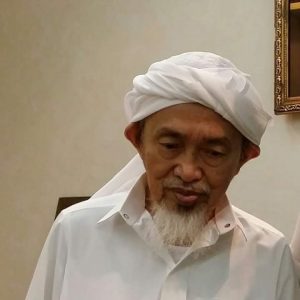 Habib Hamid was born in the village of Kalayan in Sothern Kalminatan in Indonesia on the 25th of Shaban in 1345 Hijri (1927 CE).  He was however of Hadrami ancestry via the Ba Alawi Sayyids of the al-Kaf family.

He was raised in a home of piety and knowledge under the care of his father, his mother having passed away when he was young.  He undertook his primary studies under his father and then joined the government school of his area where he completed the different levels of study at the time.  In the year 1360 hijri he joined the Madrasah al-Khayriyyah where he studied for 3 years taking from scholars such as:  Shaykh Umar Ba Raja, Sayyid Salim Aqil and others.  Thereafter he returned to Banjar Maseen and joined the institute named Dar al-Salam al-Diniyyah in Martafura and took from the scholars there such as:  Shaykh Muhammad Sharani bin Arif, Shaykh Hussain Qadri, Shaykh Abd al-Qadir Hasan and others.

In 1367 hijri (1948 CE) he made the intention to travel to Mecca for performing the Hajj and thereafter seek residence in the Holy City to seek knowledge.  After his arrival he studied in the circles of the scholars of the Masjid al-Haram for a period of four years after which he joined the Dar al-Ulum al-Diniyyah in 1371 hijri and graduated in 1374 hijri.

He then began his teaching career and taught fiqh, usul, hadith, Arabic grammar, astronomy and other sciences such that he became known as one of the scholars of the Masjid al-Haram.

His teachers in addition to the above mentioned are:

Habib Hamid was honoured to teach in the Masjid al-Haram near the Bab al-Mahkamah from the year 1374-1399 alongside lessons in his home. He also taught for a number of years in Shaykh Muhammad Yasin al-Fadani’s school in Mecca, and upon Shaykh al-Fadani’s passing away took over his weekly lesson in his home which ran until now.

Links to the UK

Some students with the Karima al-Marwaziyya Foundation in the town of High Wycombe in the UK came to know of Habib Hamid al-Kaf over the last few years but were unfortunately unable to meet him due to inability to travel and Habib Hamid’s moving home and thus being difficult to locate when some students visited the Hijaz a few years ago.

These students in the UK were however were able to benefit from scholars who took directly from him such as Shaykh Tariq Sardar and Shaykh Khalid Turkestani from Mecca.  The latter this last Ramadan (2015) specifically narrated to us rare musalsalat narrations from Habib Hamid to be transmitted to us.  He also gave to us the Mudd vessel from Habib Hamid for us to keep in High Wycombe along with the ijazah for the vessel.  Students in High Wycombe did request an ijazah directly from Habib Hamid, however he requested that students visit him in person for this honour.

Habib Hamid al-Kaf’s funeral was prayed today after Isha in the Masjid al-Haram, after which he was taken to be buried in the Maala graveyard in the enclosure specified for the noble Ahl al-Bayt.