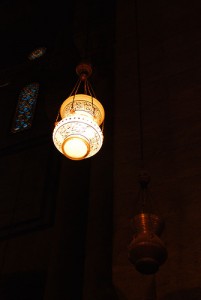 Tafsirs of the Quran are many, time to read them  however is limited.  Two of my favourites are the Tafsir al-Mazhari of Qadi Thanaullah and Mahasin al-Tawil of Shaykh Jamal al-Din al-Qasimi.   Opening the Tafsir al-Mazhari every so often at a random page usually yeilds interesting points of commentary which make me regret not being able to spend more time with this work.  Looking through the former tafsir I was reading the commentary of these verses:

Allah is the Light of the heavens and the earth. The similitude of His light is as a niche wherein is a lamp. The lamp is in a glass. The glass is as it were a shining star. (This lamp is) kindled from a blessed tree, an olive neither of the East nor of the West, whose oil would almost glow forth (of itself) though no fire touched it. Light upon light. Allah guides unto His light whom He will. And Allah speaks to mankind in parables, for Allah is Knower of all things.

Qadi Thanaullah in his detailed discussion of this verse – in the course of citing a number of different commentaries- said the following (6/525 onwards):

How wonderful is that which Kab said…

Then Qadi Thanaullah after detailing some of the Prophetic miracles returned back to this interpretation of this verse and said the following:

Salim related from Ibn Umar regarding this verse:  The niche is the inner self of Muhammad (Allah bless him and give him peace), the glass is his heart and the lamp is the light which Allah placed in him.

‘Neither East nor West’ meaning neither Christian nor Jewish.

‘Lit from a blessed tree’ meaning Ibrahim (Upon whom be peace).

‘Light upon light’ the light of Ibrahim upon the light of the heart of Muhammad (Allah bless him and give him peace).

Muhammad bin Kab al-Qurazi said:  The niche is Ibrahim, the glass is Ismail and the lamp is Muhammad (Allah bless him and give him peace).  Allah named him a lamp (Misbah) just as he named him ‘Siraj al-Munir‘.  Lit from a blessed tree which is Ibrahim (Upon him be peace).  He was named blessed (mubarak) because the majority of the Prophets are from him.

‘Neither Eastern nor Western’ meaning Ibrahim was neither Jewish nor Christian, but rather was a an upright (Hanif) Muslim…

‘Whose oil would almost glow forth (of itself) though no fire touched it’  The excellent qualities of Muhammad (Allah bless him and give him peace) would almost become apparent to people before he was given revelation.

‘Light upon light’  A prophet from the offspring of a Prophet, the light of Muhammad upon the light of Ibrahim (Blessings and peace be upon them both).