Salam.  Please find some brief notes and download link for this Qasidah.  I have a commentary on it by Shaykh Hasnain Muhammad Makhluf  (one of the famous Azhari scholars) somewhere which I haven’t had the opportunity to refer to for the post below.

About the Author Ibn al-Nahwi
He is Yusuf bin Muhammad bin Yusuf, Abul Fadl known as Ibn al-Nahwi al-Tawzari.  He was born in Tawzar in the southern Yunisa in the year 1042 Hijri.  He studied with a number of the scholars of his time not least the jurists (fuqaha) such as Abul Hasan al-Lakhami, his Shaykh al-Ma’zari and likewise al-Shaqratasi.

After Abul Fadl completed his travels in the pursuit of knowledge he returned to his hometown of Tawzar, but had to leave it due to the oppression of the ruler of that place.  He therefore lived in different cities of Algeria and Morrocco teaching grammar, jurisprudence, principles of law, tenents of faith whilst at the same time traversing the path of self purification and abstinence.

He was known for his piety and became well known for his mastery of jurisprudence.  Along with this efficacy of his supplications (dua) was attested to such that it was said by some:  I seek refuge in Allah from the supplication of Ibn al-Nahwi!

The Story of Qasidah al-Munfarijah

After his leaving his hometwon of Tawzar he headed towards Algeria and stayed in the Masjid of Bani Hammad in Masaylah.  A man there complained to him of his suffering from his having to flee from the oppressor of his homeplace and requested him to raise the issue with the oppressor so that he may permit him to return.  He said:

The ruler saw a dream which troubled him and resulted him in halting his acts of oppression whilst admitting to his sins.  He instructed that this mans wealth be returned because he saw in his dream the Prophet (Allah bless him and give him peace) who said:  Send to Abul Fadl bin al-Nahwi in the masjid known as such in Algeria, and carry out what he orders.  The Khalifah did this and sent someone in search of him.

When he entered and found him he said:  What is your need O Abul Fadl?    He infomed him of his order and wrote for him to return of all that he had been informed about.

Then he was asked:  What is yor means with the Messenger of Allah?
He then informed him of his poem: 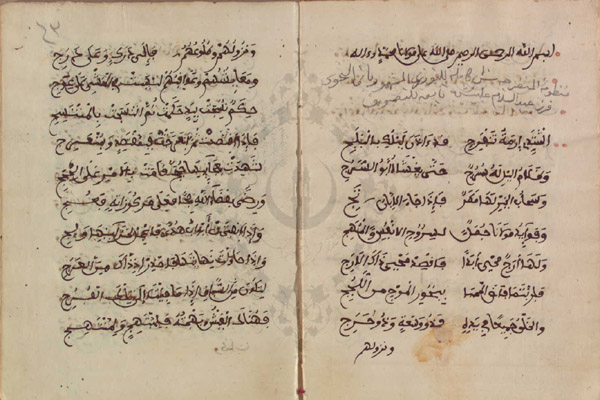