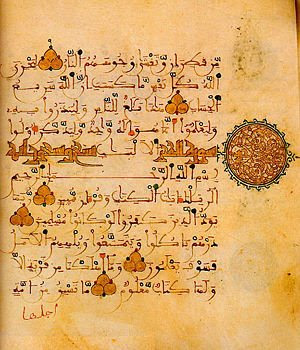 Salam. Muslims from the Indo-Pak region are known for the manner in which they show respect to the Quran, which can be at times be in sharp contrast to some rather modern attitudes of some Muslims in the Arab world. I thought I would present some brief (but by no means exhaustive) points on this issue adapted from a longer discussion in Arabic. I hope this brief amount none the less be of benefit for those who may have an interest in this issue. [Note: The word Mushaf is used to refer to a copy of the Quran]
***

A Hadith on Showing Respect to Holy Books
Abdullah bin Umar (Allah be pleased with Him said) as reported in Abu Dawud (4449) :

.
Legal Verdicts On Placing the Mushaf on the Floor
From those scholars who have forbidden the placing of the mushaf on the floor are Sh. Illish of the Maliki school in his work ‘Fath al-Aliyy al-Malik’ (2/360)
.
We ask Allah (the Exalted) to increase our link with the Quran in the terms of respect, recitation and reflection. Ameen.
.