Resting in Peace Part 1: What Does Taking a Grave as a Masjid Mean? 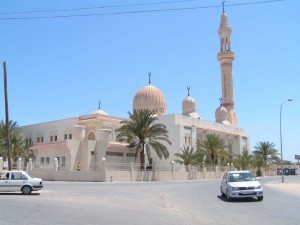 Many people have been shocked at the behaviour of the violent thugs in Libya and their desecration of the Maqams of pious Muslims not least a companion of the Prophet (Allah bless him and give him peace).  There seems to be a fair amount of misinformation circulating amongst Muslims regarding the common phenomenon of masajid which are built adjacent to the graves of the pious, or include a grave within their complex.  The worrying effect of this misinformation is the tacit approval from certain scholars, people of authority (politicians) and lay people alike for the destruction of these graves, and more alarmingly the digging out of the graves and transferring of remains.

I hope to be able to post a range of different information correcting misunderstandings from the work Kashf al-Satoor (inshAllah); but due to time commitments am not sure whether this will be possible.  We ask Allah (Most High) for tawfiq to do so.  Please find the first installment below:

A common misunderstanding is that the hadith which prohibit taking the graves of the Prophets as a masjid mean that any grave within a masjid complex or adjacent to the main prayer hall are prohibited.  Our ulema who commented on this explained that this is not the meaning of the hadith, rather what is meant is that the actual grave itself is prostrated upon or that people offer their prayer in direction of the grave as opposed to the direction of Makka.

The Messenger of of Allah (Allah bless him and give him peace) said in his final illness, “May Allah curse the Jews and Christians who took the graves of their Prophets as masajid.”

Masajid is the plural of masjid, which is the name of a physical place/location.  The hadith is referring to the actual place of the grave itself and is not referring to that which surrounds the grave, is adjacent to the grave, or is above the grave.

They made masajid upon them.  He said: the conditional clause [upon them] indicates that making a masjid adjacent to graves is permitted [la ba’s bihi].

This hadith contains the permissibility of supplicating against the people of disbelief, the prohibition of prostrating upon the graves of the Prophets.  This includes that it is prohibited to prostrate to anyone other than Allah (Azza wa Jall).  The hadith can be interpreted to mean that the graves of the Prophets are not taken as a qibla (direction of prayer) to which prayers are directed…A group claimed that this hadith is evidence that it is disliked to pray in a graveyard or with a graveyard in front of one, however I do not regard this to be a proof for this.

The Messenger of Allah (Allah bless him and give him peace)  warned his companions and the rest of his community of the bad practices of the nations which had preceded him, who would offer prayer to the graves of the Prophets, taking them as a qibla and masjid (place of prostration).

When the Jews and Christians had prostrated to the graves of their Prophets out of honouring them and making them a qibla to which they would direct their prayers, taking them as idols.

As for the person who makes a masjid adjacent to [the grave of] a pious person or prays in his cemetry, intending by it istizhar of his soul, or attaining a trace from his worship, not out of honouring or facing the direction of the grave and its like, then there is no harm in this.  Do you not see that the resting place of Ismail (Upon him be peace) is in the Masjid al-Haram at the Hateem?