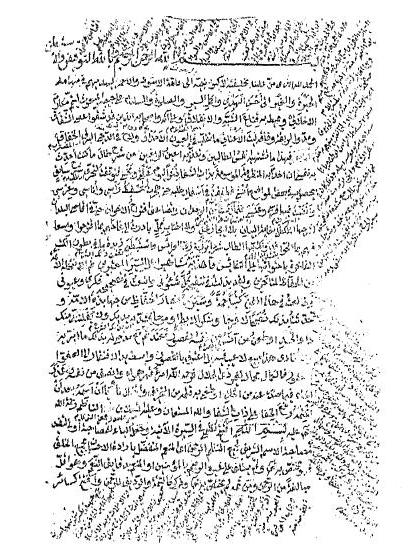 I came across the wonderful commentary of Imam al-Jazari’s poem on the sirah called ‘Dhat al-Shifa’, the commentary being by Allamah Muhammad bin al-Haaj Hasan al-Aalaani al-Kurdi (d.1189) from the village of ‘Sanjawi’ in the district of Sehdeshat in Iranian Kurdistan.  It is full of many useful benefits, the following is one.

It is compulsory for everyone to believe that He (Allah bless him and give him peace) was the most beautiful of Allah (the most Highs) creation in all of his body parts, because his outer beauty is a proof of his inner perfection…in between his shoulders is the seal-sign-of Prophethood.

The statement in some narrations that it was between the shoulders is approximate, as that which is correct as mentioned by al-Suhaili is that: It was on the upper left shoulder, this is clearly mentioned in the narration of Muslim [346].

They have differed was he (Allah bless him and give him peace) born with it, or was it placed after his birth? there are two opinions.  However in the hadith of Abu Dharr in al-Bazzar and others the mention that : Two angels came to him (Allah bless him and give him peace) in the valley of Makkah, one of them ordered his companion to cut open his stomach, extract his heart and wash it.  Then his stomach was stitched and the seal was placed between his shoulders [reported by al-Bazzar 2371].

And with Abu Nuaym that : When he was born an angel took out a (surrah) wrapping of white silk in which the seal was, and it was struck on his shoulders like an egg (baidah) [Abu Nuaym in Dalail al-Nubuwwah 330] and al-Hakim reported in al-Mustadrak from Wahb bin Munabbih that Allah (the most High) did not send a Prophet except that upon him was the sign (shamah) of Prophethood on his right hand, except for our Prophet for his sign (shamah) of Prophethood is between his shoulders [al-Hakim 2/577].

Based on this the placing of the seal between his shoulders facing his heart is from his (Allah bless him and give him peace) special qualities.  And the statements of narrators have differed over its description.