Shah Waliullah al-Dihlawi Visit to Punjab & Mazars of the Awliyah 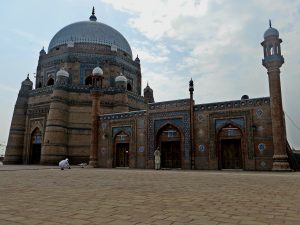 Point of benefit: When the desire to undertake travel to the Haramain Sharifain (May Allah increase them both in nobility and honour!) occurred and this blessed resolve became firm, in Rabi al-Akhir 1143 hijri he (Shah Waliullah) set off in the company of his elder maternal uncle Shaykh Ubaydullah (May Allah Taala protect them) via the route of Lahore.
During this blessed journey wherever they came across a tomb (mazar) of a wali they would go to it and spend a little time there, and whichever nisbat the wali possessed would become apparent to him which he would then explain in detail.
When they reached Panipat they visited the tomb of Shah Bu Ali Qalandar, Shah Shams Turk and Shah Jalal (Allah sanctify their secrets). After this after reaching Sirhind they visited the tomb of Hazrat Mujaddid Shaykh Ahmad Sirhindi and from there they went to Lahore and the tomb of Shaykh Ali Hujwiri (Allah sancitify his secret).
They then reached Multan where they visited the shrine of Makhdum Baha al-Din and Shah Rukn Alam (Allah sanctify their secrets) and he proceeded to detail the spiritual states (ahwal) of each person.
In the city of Multan most of the students of knowledge took the pledge of spiritual allegiance (bayat) and received instruction on spiritual exercises to perform. Some even attained the station of “spiritual ecstasy” from merely one blessed spiritual gaze and only came to their senses after some time. Some others began to shout ecstatically without being able to control themselves .
At the time of Shah Waliullah’s departure most peoples state was that they were insistent on leaving friends and family behind and departing with him. However Hazrat-e-Aqdas keeping in mind what was best consoled everyone and then departed.