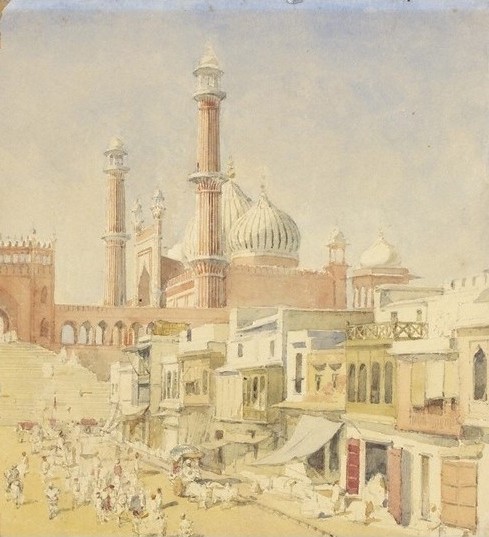 I found the following piece in the introduction to the edition of Shah Waliullah al-Dehlawi’s work ‘Khayr al-Kathir’ published out of Dhabel in Gujrat (India). It caught my attention, as this point was mentioned to me many years ago by our respected: Ustadh Dr Abul Hasan Hussain Ahmad. Readers should take note of Shah Sahib explicitly mentioning his being hanafi, something which needs clarifying lest people should misunderstand this matter from reading various works of his or the claims of those who seek to ascribe themselves to him. Likewise the more salient point of his labelling himself Ashari in Aqidah and Sufi in Tariqah. The introduction below was authored by Mawlana Muhammad Ahmad Rida al-Bijnori, the secretary of the ‘Majlis al-Ilmi’ dated 1934 (1353 Hijri). Mawlana Ahmad Rida al-Bijnori (pg.7-9) said:

Overview On Taqlid
And from them is that he called the people to abandon blind imitation whose source in none other than ignorance and following of the desires of the ego (nafs). He encouraged their scholars to choose/select legal issues after researching and verification. He was in each issue cognizant of the views of the Mujtahid Imam’s, knowledgeable of their evidences and proofs. He would join between them and give preference to some over the other, and would elucidate to them the causes of the differences between the Mujtahid’s in legal issues and explained to them the issue of Ijtihad and taqlid with complete detail and total verification.

His View On The Correctness Of The Shafi School
He was from the followers (muqallid) of the greatest Imam, Abu Hanifah al-Numan (Allah the most High have mercy on him).

Due to this the historians have mentioned that his lesson was a source of all of the Islamic sciences, not least the knowledge of tafsir, hadith and hanafi fiqh.

That which is understood from some of his statements that he gave preference to the Madhab of al-Shafi (Allah have mercy on him) and his saying that it is the most correct of the four schools (madhab) according to me is not taken according to its literal meaning (dhahir). Because he has clearly stated in some of his works that the correctness of a school according to him holds two meanings.

First: That it is in conformance to the outward (dhahir) texts of the Quran and Prophetic hadith. The other is it being in conformance to their meanings and intended aims. What he said regarding the correctness of the school of Imam al-Shafi (Allah have mercy on him) was according to the first meaning, and the correctness of the school of the Imam Abu Hanifah was according to the second meaning. And Allah knows best the intent of his servants.

Shah Waliullah’s Describing Himself as: Hanafi, Ashari, Sufi
The clearest of that which is evidence of his being hanafi in his approach (mashrab) is that he himself declared and confirmed it in his writing, the detail of which will come later.

There is present in the ‘Khazinah al-Kutub al-Mashraqiyyah’ of Khudabakhsh in Azimabad (Patna) a copy of Sahih al-Bukhari which is of great importance. For it was used in the lesson of Shah Waliullah Muhaddith al-Dehlawi (Allah have mercy on him) which was read to him by a student of his named Muhammad bin Pir Muhammad bin al-Sheikh Abul Fath.

“The teaching of Sahih al-Bukhari was completed on Wednesday with six days passing from Shawwal in the year 1159 in Dehli, close to the Jumna in Jami al-Fayruzi. In the handwriting of Sheikh Muhammad bin Pir Muhammad bin al-Sheikh Abul Fath al-Umari al-Bilgrami then Ilahabadi. The reading of it was completed to Sheikh Waliullah al-Umari from the beginning of the work to the end.”

“To proceed, our brother in Allah (عز و جل) the pious and righteous, Sheikh Muhammad the son of Sheikh Pir Muhammad, the son of Sheikh Abul Fath, al-Umari by way of lineage, al-Bilgrami by origin, al-Ilahabadi by birth and upbringing, read to me all of al-Jami al-Sahih al-Musnad authored by the Imam, the proof, the commander of the Faithful in hadith, Abu Abdullah Muhammad bin Ismaeel al-Bukhari. He heard it from from me with the reading of Khwaja Muhammad Amin, he also read to me portions from all of the six books, and from the Muwatta Imam Malik bin Anas, the Musnad of al-Hafidh Abu Muhammad Abdullah bin Abd al-Rahman al-Darimi and the Mishkat al-Masabih.

He then finally said:

“And he wrote it with his hand, the one needy of the mercy of Allah the Generous and Most Loving, Waliullah Ahmad bin Abd al-Rahim bin Wajih al-Din bin Muadham bin Mansur bin Ahmad bin Mahmud, Allah forgive him and them, and join him and them with their righteous ancestors. Al-Umari by way of lineage, al-Dehlawi by way of homeplace, al-Ashari in aqida, al-Sufi in in Tariqah, al-Hanafi by way of practice, al-Hanafi and al-Shafi in terms of teaching. The servant of Tafsir, Hadith, Fiqh, Arabic, Kalam, and he has in all of these works. And all praise due to Allah in the beginning and end, outwardly and inwardly, the possessor of Majesty and Generosity.

Confirmation Of The Accuracy of The Above
Below this writing is the statement of Shah Rafi al-Din al-Dehlawi whose meaning is:

“There is no doubt that this is the handwriting of my respected father- written by the needy one Muhammad Rafi al-Din.”

There is upon this copy of Sahih al-Bukhari another statement which confirms that Sultan Shah Alam ordered a scholar whose name was Muhammad Nasih to copy it from its beginning to the end and compare it to a copy which is relied upon for its correctness. As for Khwaja Muhammad Amin whom the Imam mentioned in his statement, he is one of his students who attained his closeness and took allegiance at his hands.

***Note: Subtitles above are mine