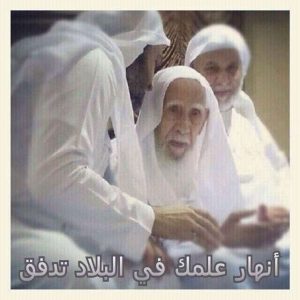 This is a brief biographical entry for the most learned scholar, jurist, ascetic, remnant of the pious predecessors, the Mufti and reviver (Mujaddid) of the Shafi’i school in al-Ahsa.  Ever since coming to learn about Shaykh Ahmad al-Dawghan for the first time in 1997 I had desired to somehow meet the Shaykh.  Alhumdulillah I was finally able to meet him at the end of 2006 or beginning of 2007 , visiting him in his home in al-Ahsa.

His father was from the students of knowledge, his grandfather was a scholar as was his ancestor Shaykh Hussain.

It was in al-Ahsa where he undertook his studies, amongst his teachers being:

In the course of his studies he memorized the Quran at a young age, as well as the text of al-Zubad in Shafi’i fiqh and parts of the Alfiyyah Ibn Malik.

“We were afflicted with poverty and now we are experiencing immense blessings, we are unable to praise Him (Allah Most High) sufficently.”

He possesses an unbroken chain for the books of the Shafi’i school linking back to Imam al-Shafi’i. It is said that there is between Shaykh Ahmad al-Dawghan and between Shaykh Ahmad Zayni Dahlan (the Mufti of Makkah who died in 1304 Hijri/1886) only one narrator, namely his teacher Shaykh Muhammad bin Hussain al-Arfaj.

His advice to students of knowledge when once requested to do so was,

“I advise you to have taqwa of Allah and obedience to Him, seeking knowledge, righteous action and sincere intention.”

Praise of a Notable Scholar

Shaykh Muhammad Awwamah said of him,

“In the city of al-Ahsa is the remnant of the righteous Salaf, our Shaykh, the scholar who practices his knowledge, the example to be followed…Shaykh Ahmad al-Dawghan, Allah protect him and give him well being.  He trained generations over decades.  They are relied upon in Fatwa in Shafi’i fiqh, may Allah give coolness to his eyes through them.”

From the works which he has taught are:

May Allah Taala protect Shaykh Ahmad al-Dawghan and allow us to continue benefitting from him, Amin.