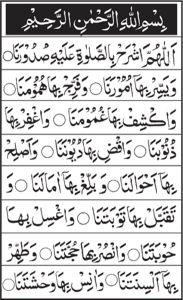 More than a year ago I helped put together a rough translation of the Dua to be recited after the completion of the reading of the Dalail al-Khayrat by Shaykh Ahmad al-Nakhli of Makkah.  A brief biography was appended to this translation taken from a couple of sources, most notably from Shah Waliullah al-Dihlawi (whose comments also shed light on his maslaki leanings).  I am considering revising the translation of the dua (the start of which is pasted here) and publishing the small text in the future.  In the meantime the biographical entry for Shaykh Ahmad al-Nakhli is included below.  Please note a general biography is mentioned first followed by Shah Waliullah’s words regarding the Shaykh:

(Allah Have Mercy On Him)

All praise is for Allāh, Lord of the Worlds; blessings and peace be upon the Master of the Messengers, his family, companions and all those that follow them with goodness.

He is the Imam, most learned scholar, hadith expert and jurist: Abu Muhammad Shihab al-Din Ahmad bin Muhammad bin Ahmad bin Ali well known as al-Nakhli, the Sufi, al-Naqshbandi al-Makki al-Shafi.  He was born in the year 1044 Hijri in Makka al-Mukarrama and grew up there.

He distinguished himself the Islamic sciences and taught and benefitted people in the Masjid al-Haram.  He was described as being cheerful, humble and possessing an illuminated face.

Countless students narrated and benefitted from him, amongst them: Abu Tahir al-Kawrani, Abd al-Rahman bin Ahmad al-Nakhli, Shihab Ahmad al-Malwi and others.

From his works are: Bughyah al-Talibin li Bayan al-Mashaikh al-Muhaqqiqin al-Mu’tamidin which was published in the past in India.  He passed away in Makka al-Mukarrama at the beginning of the year 1130 Hijri.[1]

Shah Waliullah al-Dihlawi (Allah have mercy on him) said regarding him:

“He was an expert in both the outer and inward sciences and benefitted from the regular company of Shaykhs of sufi orders and scholars of the sacred law.  He obtained the cloak of authorisation from Sayyid Abd al-Rahman Mahbub, Sayyid Ahmad Rumi, Sayyid Abdullah Saqqaf and Mir Kalan bin Mir Mahmud Balkhi and others.  He studied hadith with Muhammad bin al-Ala’ Babili, Shaykh Isa Maghribi and other scholars from that generation, and from them he obtained the unbroken transmission for the hearing of Bukhari and the Muwatta.  He was associated with the families of a number of scholars and from the beginning he was attracted to a love of knowledge and scholars and keeping their company.  He held the Sufis in high regard and was consistent in their spiritual practices, and benefited from the company of the scholars from the Haramain and those from outside it.  To sum up, it is that Shaykh Ahmad Nakhli was from the great figures of Makka Muazzama the light of whose blessedness was widespread and whose supplication was answered.

Shaykh Ahmad Nakhli’s son Shaykh Abd al-Rahman Nahkli recounts that his grandfather would not have any male children who remained alive, due to which he would remain extremely distressed.  When Shaykh Ahmad was born a supplication for him was requested from the awliyah as well as their help and spiritual attention.  Every Friday he would send Shaykh Ahmad Nakhli to Shaykh Taj Sunbhuli.  One day by it so happened that Shaykh Taj Sunbhuli after a period of reflection conveyed him a message by means of the servant who brought Shaykh Ahmad Nakhli to him that, “This child is not like you, rather he will excel you and be a person of virtue and felicity.  It is a separate matter that he is of a small lifespan.”  When the servant reached his master and conveyed to him the message of Shaykh Taj Sunbhuli he sent him back immediately to request from Shaykh Taj Sunbhuli that “I have given my lifespan to this child and in relation to this I seek your intercession.”  When Hadrat Shaykh [Taj Subhuli] heard this message he immediately focused and after a few moments said to the servant that “Tell your master that his request is completed, and from myself I give him (meaning the father of Shaykh Ahmad Nakhli) a staying period of three months to prepare for his journey to the afterlife.”  As a result Shaykh Ahmad Nakhli’s father departed from this perishing world at this time and Shaykh Ahmad Nahkli reached 90 years of age.

Shaykh Abd al-Rahman further stated that in all worldly dealings and lending and borrowing I was my father’s agent. When my respected father (Shaykh Ahmad Nakhli) reached the end of his life and weakness had overcome him I presented to him the complaints of those who requested the repayment of their loans.  I stated that “I fear that if God forbid if you were to pass away then all of these debts will become my responsibility and those close to me and relatives will not reply upon my being an agent.”  My respected father told me that “Do not give this fear any place in your heart.  I have full faith that I will not die until I have repaid all debts which I owe.  I think that that night will be the last night of my life in which nobodies debt will remain on me.”  A short period before his passing away all of these debts were repaid with money coming from places which could not have been expected.  And according to what he said his last night in this world arrived when he had no debt left to repay.

Shaykh Ahmad Nakhli stated that when my guide in the Khalwati tariqah, Shaykh Isa bin Kanan Khalwati granted me authorisation in this tariqah he made me his deputy (khalifah) in Makka Muazzama so that all the disciples of the khalwati tariqah gather in front of me after the offering of the tahajjud prayer, as was their habit, and be busied in their awrad and wazaif.  There was extreme hesitation in my heart regarding this because I was fully inclined towards the Naqshbandi order, and I did not have the courage to speak in front of Shaykh Khalwati.  In the state of this hesitation I turned to the Master of the Messengers upon him be salutations and blessings and that year was honoured to visit the sacred rawdah.  On Friday before the Juma’h prayer I was blessed with a vision of the Master of the two worlds (Allah bless him and give him peace) that he along with the four khalifah’s was present in the Ottoman area of visitation (ziyarate-e-uthmania).  I quickly made my way towards him and attained the good fortune of kissing his blessed hand, thereafter proceeding in order to kiss the hands of the Khulafah.  After this the Prophet (Allah bless him and give him peace) grasped my hand and took me towards a new prayer mat laid out at the front of his blessed tomb in the first row.  He said, “This is the prayer mat of Shaykh Taj, sit upon it”.  I understood that he was indicating to the Naqshbandi order and that he had granted an authorisation (ijazah) in that order.”[2]