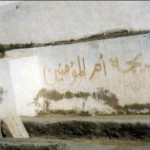 Whilst reading something about Shaykh Muhammad Ishaq al-Dihlawi a passing mention was made of a distinguished daughter of his, along with a reference to collection of biographies authored by Shaykh Abd al-Sattar al-Dihlawi where further details could be found.  Alhumdulillah, I managed to locate the reference to this  great female scholar, Allah have mercy on her and her father.  Shaykh Abd al-Sattar al-Dihlawi in the biographical entry of her father (Shaykh Ishaq al-Dihlawi) mentions the following in Fayd Malik al-Wahhab (1/122-123) :

“The subject of this biography (Shaykh Ishaq al-Dihlawi) left behind pious daughters, amongst them being: Shaykha Khadija bint Mawlawi Ishaq, a scholar of the issues of Islamic law and Prophetic hadith.  Her birth was in the year 1230 Hijri.

She studied with her father: Tafsir, Aqaid, Hadith, Usul, Tasawwuf and other than them from the literary sciences.  She turned her focus towards knowledge totally, and studied numerous books thoroughly from her father in all of the sciences.  She had an immense love for hadith and its people, and heard many of the Musalsal hadith from her father and from her uncle Mawlawi Yaqub al-Muhajir al-Makki…She sought ijazah from the scholars of the different lands, and they granted her ijazah…she became well known in her time and had great fame.

She narrated many of the musalsal hadith, and took the spiritual path from her father. She had litanies (awrad), supplications and a deep knowledge of tasawwuf (mashrab rawi).  She guided a large number of people, not least the women.  They accompanied her closely, and benefitted from her manifestly.  She rectified the state of many of them, such that they became known between the women for their asceticism, taqwa, conviction, patience, scrupulousness, good manners and regularity in the performing of obligatory acts.

We have not heard of the likes of this in our time, nor of anyone who comes close to her in her knowledge, uprightness, ascestism, scrupulousness, and her gathering within herself excellent qualities.  Such that the words of the poet ring true for her, namely:

A large group (of students) took from her.

In summary, she was from the amazing individuals of the period, beautifying the age, and the pride of women.  She died in Makka the ennobled after she had reached 80 years of age, in the year 1310 Hijri.

She was buried by the grave of Sayyidah Khadija al-Kubra (Allah Most High have mercy on her) Amin.”

The picture above is of the grave of Sayyida Khadija al-Kubra (Allah be pleased with her), in proximity to whom Shaykha Khadija bint Mawlawi Ishaq is buried.