Story of a Bird and Sufyan al-Thawri 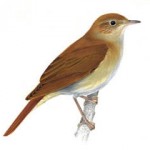 Imam al-Dhahabi mentions the following story in his entry for Sufyan al-Thawri -Allah have mercy on him- (as cited in Fawaid al-Gharra 3/281):

“Ali bin Abd al-Aziz said: Arim narrated to us saying: I went to Abu Mansur to visit him, he said to me: Sufyan resided in this house, and there was here a nightingale belonging to my son.

He [Sufyan] said: Why is this locked up (in a cage)? It should be freed

I said: It belongs to my son, and he gives it to you as a gift

Sufyan said: No, I will give him a dinar for it

He said: He then took it and freed it, and it would go out and return in the evening, and would be at the far end of the house.

They then found it dead by his grave and it was buried alongside Sufyan.