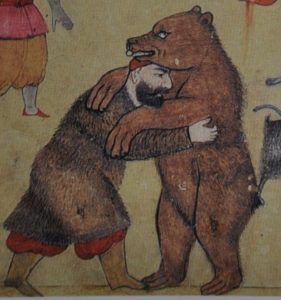 I came across the following short extract when looking for material regarding a description of wrestling at the time of the Prophet (Allah bless him and give him peace)  1500 years ago.  It seems clear – to me at least – that the wrestling referred to in Muslim sources is closer in spirit to the stand up (Tachi-Waza) throwing techniques of Judo than the ground grappling focus of BJJ.

Ibn Ishaq amongst others mentions in his Sirah that in Mecca there was a person of immense strength who was skilled in wrestling.  People would come from other places to wrestle him and he would defeat them.  One day when he was in one of the valleys of Mecca he met the Prophet (Allah bless him and give him peace) who said to him, ‘O Rukanah, are you not conscious of Allah and accept that which I call you to?’ Rukanah replied, ‘O Muhammad, do you have anything as proof of your truthfulness?’  He replied, ‘Yes, if I was to defeat you in wrestling would you have faith in Allah and His Messenger?’
Rukanah replied, ‘Yes O Muhammad, prepare for a wrestling match!’
The Prophet (Allah bless him and give him peace) said,  ‘I am ready,’ at which point the Messenger of Allah (Allah bless him and give him peace) drew closer to Rukanah and threw him down.
Rukanah was astonished at this and asked for another match, and he was defeated for a second and then a third time.  Rukanah stood up amazed and said, ‘Your matter is astonishing.’
This was narrated by Abu Nuaym and al-Bayhaqi from Abu Umamah from two routes of transmission, one Marfu and the other Mursal.

The Rukanah who has been mentioned here is Ibn Abd Yazid bin Hisham bin al-Muttalib bin Abd Manaf, al-Qurashi, a Meccan companion who entered in to Islam in the year of the Meccan conquest.  He died in Medina during the caliphate of Muawiyah in the year 42.  Rukanah was fearsome, well built, strong and well known for his wrestling skills, such that no one had ever defeated him in wrestling nor had his skin ever touched the ground in defeat.
It is authentically reported that the Prophet (Allah bless him and give him peace) wrestled him and defeated him, as was stated by al-Khafaji in al-Nasim.

In Ibn al-Tayyib al-Fasi’s notes on the Qamus it is mentioned regarding Rukanah, ‘His story is well known, the Prophet (Allah bless him and give him peace) defeating him is from his great miracles, for Rukanah was the most skilled wrestler of his age.  His strength was such that he would stand on a piece of camel skin of a good flexible quality which would be pulled by ten men without his being moved from his spot, this was stated in the commentaries of the Shifa, al-Mawahib and other works.'”

The author then discussed some scholars who highlighted some weakness in the chain for this incident as well as it not being authentically established that the Prophet (Allah bless him and give him peace) wrestled Abu Jahl.  It would however appear that the incident above with Rukanah does have a number of chains of transmission.  Shaykh Abd al-Hayy al-Kattani continued:

Note: I have been informed that the short treatise of Imam al-Suyuti referenced above has been translated and will inshAllah be published soon.