The Different Editions of the Dalail al-Khayrat 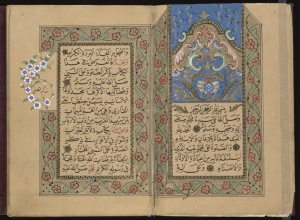 Salam
Continuing with our series on the Dalail…
***
Perhaps unknown to some, a number of different editions of the Dalā’il al-Khayrāt exist, each of them differing in some aspects from the other editions.  Thus a person examining copies of the Dalā’il from different parts of the world will find differences in the respective copies of the text.  Shaykh al-Nabhānī explained this by saying,

“The needy one Yūsuf al-Nabhānī says:  I have obtained, and all praise is for Allāh, a number of old accurate copies of the Dalā’il al-Khayrāt, each one of them being unique.  One of them being the al-Sahliyyah edition well known for its accuracy; which was often indicated to by the commentator al-Fāsī and others.  This is the statement of the scribe of that copy, at the end of which he wrote:  ‘The transmission of Sayyidī Muḥammad al-Ṣughayyir al-Sahlī for the Dalā’il al-Khayrāt was completed from Sayyidī Muḥammad bin Sulaimān al-Jazūlī.  This transmission is which Shaykh al-Fāsī refers to in Kabīr at times as the copy of the Shaykh, at times as al-Atīqah, at times as al-Sahliyyah and at time as al-Muʿtamidah.  It is that which the author (Allāh be pleased with him) wrote and corrected and it is the most correct in terms of transmission.  It was due to this that the commentators paid attention to its scribing and how it differed from other versions.  At the hands of the most needy of the slaves of Allāh (Most High) Muḥammad bin Aḥmad bin Muḥammad bin Ḥussain bin Ibrāhīm al-Barūdī, Allāh forgive them, Amin,  27 Safar al-Khayr 1276 H.’”

It was loaned to me in Madinah al-Munawwarah by the virtuous scholar and reknowned jurist Sayyidī al-Shaykh ʿAbd al-ʿAzīz al-Wazīr al-Tūnisī, a teacher in the Masjid al-Nabawi. I corrected and compared my copy against it twice, rather more than this and then returned it to him.  It is housed in his large library which he has made a charitable endowment in Madinah al-Munawwarah.  He showed me its contents and I saw in it numerous fine rare works, may Allāh reward him with Paradise…”[1]