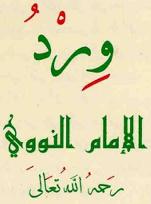 Many thanks to Sidi Isa Robert Martin for kindly posting to me from Jeddah a copy of an edition of the ‘Wird al-Nawawi’ with Sheikh al-Buti’s introduction. I had discussed the wird with Sidi Isa during one of the occasions that I had met him in Saudia Arabia, and I believe he had noted my interest in finding out more about the litany, not least because it differs considerably from what Imam al-Nawawi has mentioned in his work ‘al-Adhkar’ regarding the invocations to be recited in the morning and evening.  Readers will note that the ‘Wird’ (or Hizb as mentioned by some scholars) consists of invocations formulated by the Imam himself and not from hadith.  I thought it might be beneficial to mention a little of what Sheikh al-Buti recorded in his introduction to the work, not least as it tackles head on the doubts raised by some regarding the authenticity of the ascription of this work to the great Imam.

It has reached me that there are people who doubt, or raise doubts regarding the ascription of this litany (hizb) to Imam al-Nawawi without reliance upon any research or verification of the matter.

Here I present before those and their likes the continuous chain for the receiving of this noble litany, reaching to its author Imam al-Nawawi, Allah the most High haver mercy on him and be pleased with him.  Imam Umar al-Shabrawi said in the introduction of his commentary on this litany:

Note: Unfortunately my scanner for some reason has decided to uninstall itself.  I was hoping to scan the beautiful calligraphy of the edition sent to me.  However I have sufficed with the equally pleasing image above, which I believe if I am correct is taken from the edition produced by the Ahsai’s.  Wassalam