Etiquettes For Reading The Burda 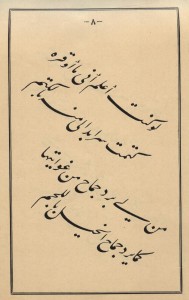 I remember having read a while back something relating to the etiquette’s to be observed whilst reciting the Qasidat al-Burda.  I came across the following  in Allamah al-Kharputi’s commentary entitled Asidat al-Shuhdah p.3-4:

The first of them is to perform wudu.

Second is to face the direction of prayer (qibla).

Third is precision in the correct pronunciation of the words and their irab.

Fourth is that the one reciting is knowledgeable of its meanings, because supplications are not effective if the reciter is not knowledgeable of their meanings, as was indicated to by Ali al-Qari in the introduction to his Hizb al-Azam…

Fifth is its recitation is poetic form because it was authored as a poem not prose.

Sixth is memorizing it.

Seventh is that the reciter has permission to recite it from its people.

Eighth is that it is recited with the salat upon the Prophet (Upon him be peace), but it is necessary that it be with the salat which was recited by Imam al-Busiri which is:

Not other than it, for if not then it will not effective as is reported by Imam al-Ghaznawi, that he would recite this qasidah every night in order to see the Prophet (Allah bless him and give him peace) in his sleep.  He was not fortunate enough to see this vision, so he complained of this to a complete Shaykh (Shaykh Kamil), and questioned him about its secret.  The Shaykh replied that perhaps you do not pay close attention to its conditions.

He replied that “Ofcourse I pay close attention to them”, so the Shaykh contemplated and thereafter said, “I have found its secret, and it is that you do not send salat with the salat which was written by Imam al-Busiri, for he would send salat upon him (upon him be peace) with his words: